HOW DID WE GET TO: WE ARE HERE? A collaborative exhibition of Artists’ Moving Image from the British Council Collection and LUX 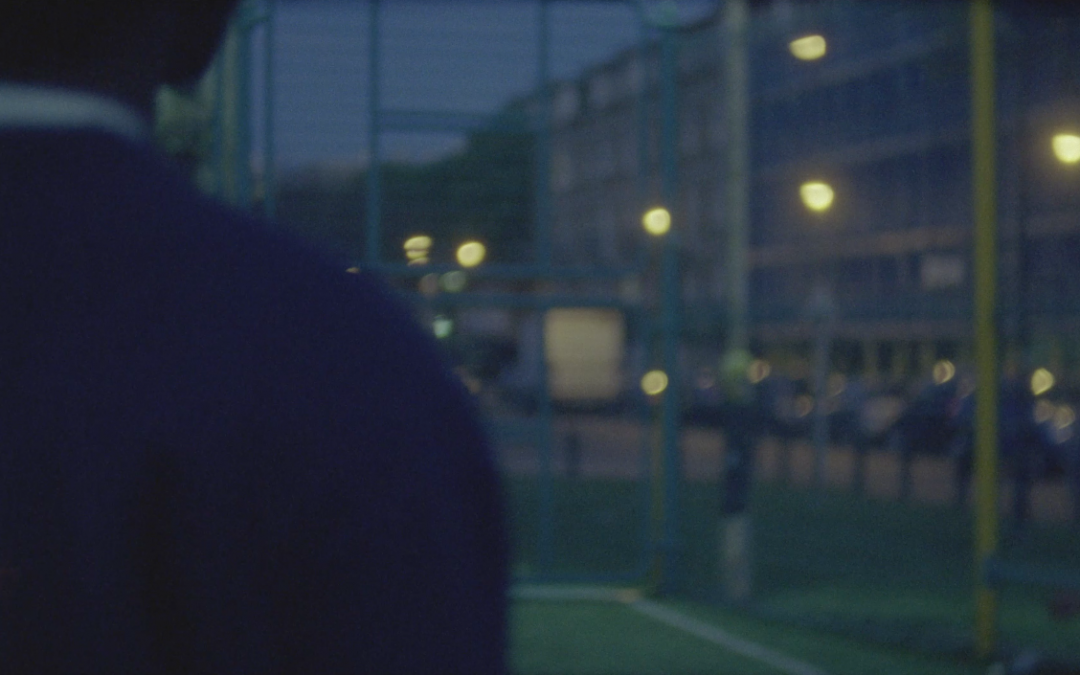 Exploring themes of marginality and its representation, community, storytelling, world-building and critically reframing histories, these linked exhibitions present films from SONGS OF A FORGOTTEN PAST, one of five artists’ film programmes curated by Tendai John Mutambu for the British Council, the UK’s international organisation for cultural relations and educational opportunities, and LUX, an international arts agency that supports and promotes artists’ moving image practices.

The two exhibitions and programme of events at Golden Thread Gallery and Highlanes Gallery are separate but in conversation with each other; different interpretations from different places, with visits from each side of the border to the other gallery offering a chance to see the films from each other’s ‘here’.

The exhibitions are curated by Peter Richards at the Golden Thread Gallery and Aoife Ruane at Highlanes Gallery.

The artists’ films being shown across both our main galleries explore possibilities for new ways of seeing the world from the point of view of those who are marginalised and excluded from dominant cultural narratives and images; those which reflect an accepted, assumed meaning of ‘being from here’ and ‘belonging’. Reframing the question of how we all came to be here offers a prompt to disrupt, to play with and perhaps even to move beyond old ideas.

Northern Ireland, overwhelmingly white for centuries, is now experiencing unprecedented levels of migration. What is it like for new arrivals here to have to navigate the complexities and nuance of Northern Ireland’s identity politics? Sectarianism has been a fertile ground for racism in some areas. The shifting territories of Brexit and Covid create fear and uncertainty, easily turned upon those who ‘don’t belong’.

Yet there has also been significant solidarity, genuine welcome and a recognition among NI citizens that those who come ‘from outside’ can represent an opportunity to move beyond long-calcified beliefs about ‘them’ and ‘us’.

On this island, at this time, with changing populations and ever-shifting senses of identity, engaging with a different way of exploring relationships to home, place, nationality and representation may perhaps lead to many ‘heres’ that are unexpected.

Street 66 (2018) chronicles the life of Ghanaian housing activist Dora Boatemah and her efforts to fight for better housing conditions and tenant’s rights to vote on the future of their own estate (the Angell Town Estate in Brixton, South London, UK). Working with self-shot footage, first-hand interviews and archival material, Ayo Akingbade’s film captures Boatemah’s character, influence and impact.

Duncan Campbell’s Arbeit (2011) presents differing tales of people, place and events using black-and-white photographs, old news reports and advertisements made by various hands. The result is a continual changing picture and an indeterminate trail of figures, ideas and anecdotes. (Note: This work contains a description of terrorist violence)

The Last Silent Movie (2007) by Susan Hiller stitches together recordings of the last speakers of extinct and endangered languages to create a multi-vocal composition. Previously buried in archives, silent, Hiller assembles their voices to speak through the work, translating words using subtitles against a black screen. Including stories, vocabulary lists and songs calling for resistance to invasion from foreign speech, the work prompts the audience to reflect on what may have led to the loss or endangerment of these languages.

Rehana Zaman’s I, I, I, I and I (2013) explores the social dynamics of group activity as seen through theatrical exercises carried out by members of Body & Soul, a UK charity dedicated to transforming the lives of people affected by HIV. In this work the group uses games, strategies and improvisation techniques developed by Keith Johnstone, Unity Theatre and The Theatre Workshop and Augusto Boal’s Theatre of the Oppressed to analyse and investigate the process of collaboration.

For d/Deaf visitors, transcripts of all the films are available at Reception.

The Process Room is an active space taking the work in the exhibition as a prompt for a range of responses. Our audiences’ ideas, questions, criticism and interpretations will form an evolving, dynamic part of this exhibition.

The programme of events for the Process Room will include:

Visitors can use the space to respond not only to the films, but also to the work created in the workshops by writing or drawing directly onto the gallery wall, or by filling out postcards inviting answers to seemingly simple questions. This room brings together different points of view, and lays bare the act of responding and interacting with an exhibition, within the immediate setting.

During the first three weeks of the exhibition, the Response Room will display batik silk and textile work made by the women of Anaka Collective, a community group supporting migrant women in Belfast and Northern Ireland, with whom the Gallery has been working for six months now. The room will also act as space where the Anaka members can share their written and creative responses and feelings when seeing the films, in their own languages and via interpretation to English. Audio recordings from the workshops will also be presented in this space.

In the subsequent weeks, works created by the various Process Room workshop participants will be added to Response Room.

Ayo Akingbade (b.1994) is a British Nigerian artist and filmmaker in London. Her short film Tower XYZ  (2016) was produced as part of STOP PLAY RECORD and has been shown at multiple festivals and screenings throughout 2017. Tower XYZ received a Special Mention Award at the International Short Film Festival Oberhausen and won the inaugural Sonja Savić Award. She is a recipient of the 2018 Sundance Institute Ignite Fellowship for emerging filmmakers.

Duncan Campbell (b. 1972) is an Irish video artist living in Glasgow. His art is often based on intense archival research and deals with a wide range of subjects including Northern Irish politician Bernadette Devlin, the DeLorean car project, and German economist Hans Tietmeyer. His films are concerned with these histories and how they bear on the present. In particular, Campbell uses his films to explore how social, political and personal narratives are constructed and relayed over time. As such, he not only questions the degree to which documentary is fiction, but he also complicates the accepted authority and integrity of cultural records. Campbell weaves imagery of his own construction with found official documentation and original footage. He was the recipient of the 2014 Turner Prize for his video work It for Others.

Susan Hiller (1940 – 2019) began her artistic career in London in the early 1970s. With a multimedia practice extending over 40 years, Hiller is one of the most influential artists of her generation. Since first making innovative use of audio and visual technology in the early 1980s, her ground-breaking installations, multi-screen videos and audio works have achieved international recognition. The common denominator in all her works is their starting point in a cultural artefact from our society. Her work is an excavation of the overlooked aspects of our shared cultural production and her varied projects collectively have been described as investigations into the ‘unconscious’ of culture.

John Akomfrah CBE (b. 1957) is a celebrated artist, filmmaker and writer, whose works are characterized by their investigations into memory, post-colonialism, temporality and aesthetics and often explores the experiences of migrant Diasporas globally. Akomfrah was a founding member of the influential Black Audio Film Collective, which started in London in 1982 alongside the artists David Lawson and L Gopaul, whom he still collaborates with today. Akomfrah has had numerous solo exhibitions at sites including the Imperial War Museum, London, UK (2018), New Museum New York, NY, USA (2018).

Rehana Zaman (b 1982, Heckmondwike UK) is based in London, working with moving image and performance. Her work is concerned with the effect of multiple social dynamics on how individuals and groups relate. These narrative based pieces, often deadpan and neurotic, are frequently generated through conversation and collaboration with others. A driving question within Zaman’s work is how socio-political concerns, in addition to providing content, can structure how an artwork is produced.

Golden Thread Gallery is Belfast’s leading contemporary visual art gallery. We work to broaden access to and improve public experience of visual art in Northern Ireland. Our purpose is to present innovative artistic programmes of high quality that embrace the breadth and variety of contemporary arts practice, and to develop, support and promote the work of contemporary Northern Irish artists and creative practice.

Our mission statement is “Creating a context, challenging perceptions, promoting creativity, delivering contemporary visual art for all”. We strive to be a destination where each and every visitor is engaged, educated, challenged and inspired by visual art.

Highlanes Municipal Art Gallery opened its doors on October 4, 2006 and was the culmination of many years planning to deliver a dedicated visual art space for the Irish north east region, of an international standard in terms of design, management, environmental control and security. The gallery is sited in the former Drogheda Franciscan Church and part of the Friary; known locally as the ‘High Lane Church’. The buildings date from the early 19th century, though elements date back to earlier times and include the former Franciscan burial crypts. The main exhibition spaces are open plan and include the old Church level and a new floor at the height of the old balcony and as such, the character of the building is not lost.

Highlanes Municipal Art Gallery programme over the first year saw it reintroduce the Drogheda Municipal Art Collection (DMAC) to the public for a three-month period. This was complemented with borrowed works from national and private collections, in order to place the late 19th century works in the Drogheda collection in their context, which has a strong representation from women artists. Other elements of the little-known Drogheda Municipal Art Collection – which dates from the 17th Century, were shown from time to time. Highlanes Gallery programmes approximately five temporary exhibitions every year, some of which are drawn from the Collection.

ABOUT WE ARE HERE

WE ARE HERE: Artists’ Moving Image from the British Council Collection and LUX is a series of five artists’ film programmes of compilations and installations curated by Tendai John Mutambu for the British Council, the UK’s international organisation for cultural relations and educational opportunities, and LUX, an international arts agency that supports and promotes artists’ moving image practices.

Each programme is curated around a theme: national identity, marginality, intimacy, the future and the environment, and the archive.

WE ARE HERE interrogates how outstanding emerging and established British or UK-based contemporary artists are influenced by these themes and how they explore them through biography, documentary, poetry and fiction.

ABOUT THE BRITISH COUNCIL

The British Council is the UK’s international organisation for cultural relations and educational opportunities. We work with over 100 countries in the fields of arts and culture, English language, education and civil society. Last year we reached over 80 million people directly and 791 million people overall including online, broadcasts and publications. We make a positive contribution to the countries we work with – changing lives by creating opportunities, building connections and engendering trust. Founded in 1934 we are a UK charity governed by Royal Charter and a UK public body. We receive a 15 per cent core funding grant from the UK government.

LUX is an international arts agency that supports and promotes artists’ moving image practices and the ideas that surround them. Founded in 2002 as a charity and not-for-profit limited company, the organisation builds on a long lineage of predecessors (The London Film-Makers’ Co-operative, London Video Arts and The Lux Centre) which stretch back to the 1960s. lux.org.uk