Not Alone continues in Rome 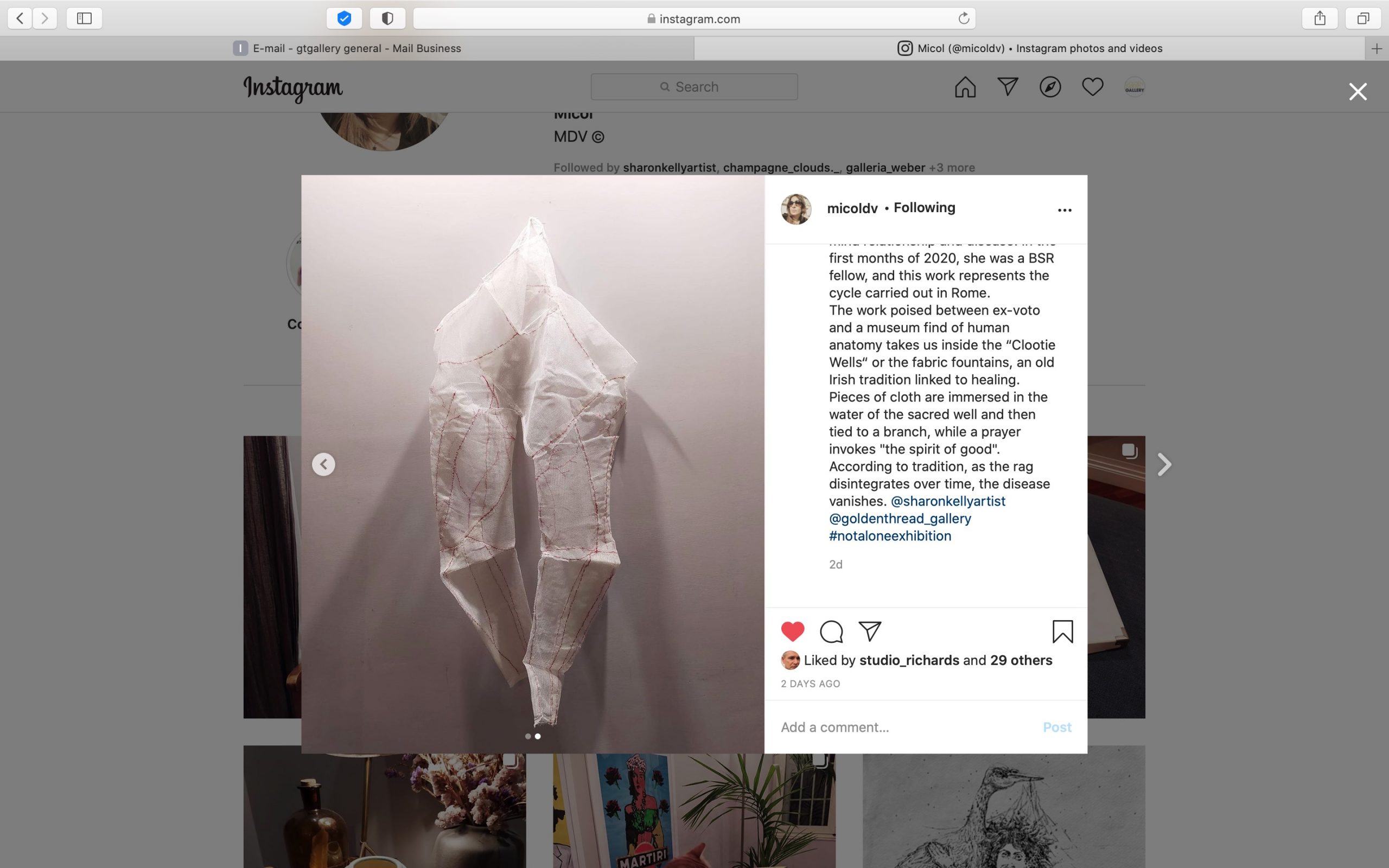 For the past two weeks, our touring exhibition ‘Not Alone’ has been installed in the Roman home of curator Micol di Veroli and exhibited to the world through her Instagram. Once Micol unpacked the artworks (under the curious gaze of her beautiful cat!), she displayed them amongst her own belongings, and wrote about impressions and inspirations she has drawn from them.

She wrote: “When the pandemic hit us, the world seemed to have stopped. It didn’t take us long to realize how the pandemic could block some things, while others continued to flow inexorably and untouched. With the lockdown in place, millions of people have been confined to their homes. Art has been a companion for many, with artists and museums feeling the need to keep the relationship with their audience alive simply by changing the “spatial dimension”, and by proposing the cultural content via social platforms including Facebook and Instagram. From these assumptions, Not Alone was born, an exhibition involving 8 Irish artists who responded to the call from the Golden Thread Gallery in Belfast…”

Here are her writings and pictures of the exhibition so far.

‘To think about things together that appear to be separate’ by John Rainey, 2020. Parian porcelain.

“During the lockdown, thousands of women were forced to share an apartment with an abusive partner or relative. “To think about things together that appear to be separate” is the title of John Rainey’s work borrowed from an essay on intersectional feminism by Angela Davis. The nineties mark the beginning of the third feminist wave. From here, something begins to change. A new awareness is in the air. We realize that until that moment feminism had always spoken exclusively for women, alongside women. And not only. It was just a certain type of women: Western, white, healthy, wealthy. Therefore, there was an urgent need for inclusion. It was time to speak for all those women whose voices are further oppressed due to various personal characteristics, such as sexual orientation, origins, culture of belonging. Hands intertwined with the colours of the Pride flag want to remind us that privileges are not a merit but to defend those who have less than us. “

“’If you want to be an artist, make all the men you want but don’t have a family’, said Nanda Vigo, undisputed lady of design and of an original artistic research centered on light. In short, being a woman, mother and an artist at the same time hasn’t always been easy. Many artists have given up their careers after giving birth to a child. Clare Gallagher is an artist and a mother. In the series of photographs called “The Second Shift“ she captured the B-side of the life of a woman artist, who returns home and is taking care of her family and housework.  The Second Shift: On Crumbs of Shadow is the testimony to the hidden work faced by a woman on a daily basis.”

“Sharon Kelly’s practice in recent years has focused on the areas of human experience and the body. In 2018, he she created the “Mind Fuel“ cycle, a survey on the body of athletes under stress. Subsequently her his interest shifted to the body / mind relationship and disease. In the first months of 2020, she was a BSR fellow, and this work represents the cycle carried out in Rome. The work poised between ex-voto and a museum find of human anatomy takes us inside the “Clootie Wells“ or the fabric fountains, an old Irish tradition linked to healing. Pieces of cloth are immersed in the water of the sacred well and then tied to a branch, while a prayer invokes “the spirit of good”. According to tradition, as the rag disintegrates over time, the disease vanishes.”

Not Alone will be with Micol for another week, and then it will continue on it’s journey, travelling next to Amsterdam. Follow its travels on Instagram!