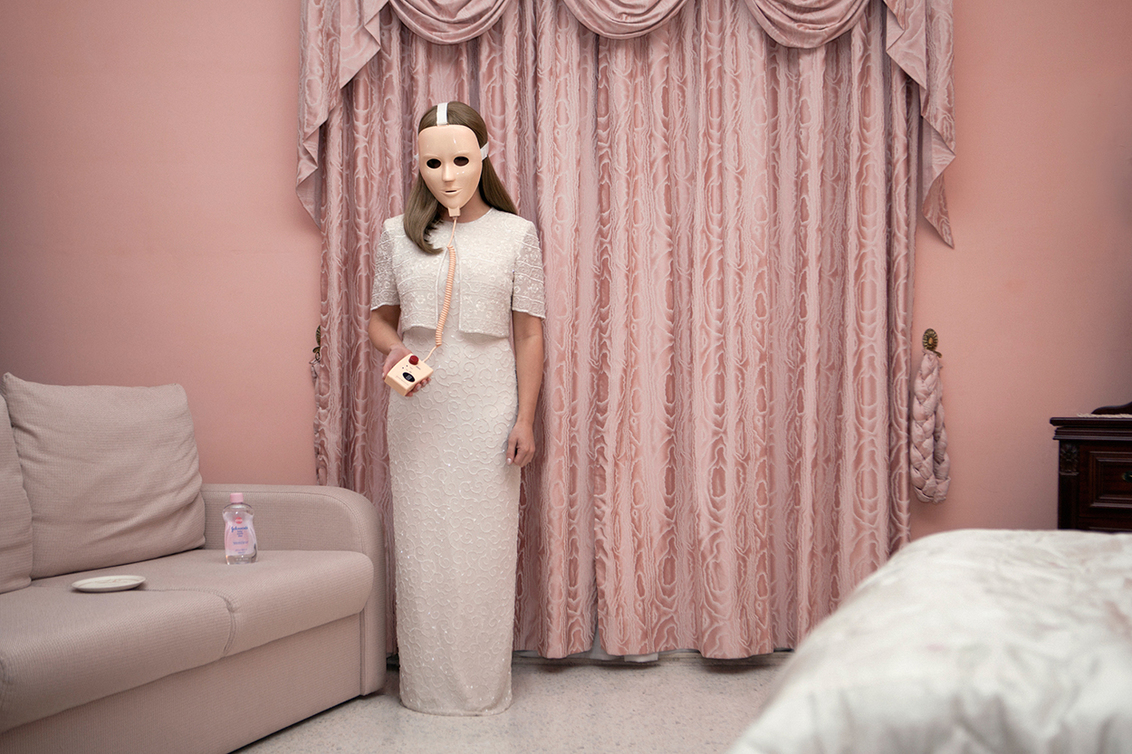 Continuing our re-cataloguing of GTG Exhibition Archive material, Gallery Assistant and artist Katharine Paisley writes about one of her favourite (re)discoveries so far!

Recently, we’ve been sorting through old archive material – as a new(ish) member of the GTG team, I’ve found this a great way to get to know the Gallery’s past and the journey it’s been on to get to where we are now.

Something that stood out for me in the archive was an old show programme for Juno Calypso’s ‘The Honeymoon Suite’. I don’t want to disappoint Calypso by falling into the gender stereotype but the beautiful pink imagery pulled me in!

On the programme’s front cover Juno Calypso’s character ‘Joyce’ stands in a blush pink room, surrounded by pink furniture and ornate pink curtains, this contrasts against her costume of a wig, a white beaded wedding dress and a pink electronic beauty mask. The only other objects in the shot include a bottle of Johnson’s Baby Oil and a plate.

Described as a ‘photographic mission’ ‘The Honeymoon Suite’ captures Calypso’s week spent posing as a travel writer at a couples-only honeymoon resort in Pennsylvania, while in character as her alter ego Joyce. London born photographer Calypso has been using this alter ego since 2011 to ‘re-enact the private underlife of a woman consumed by the laboured construct of femininity’.

“All of my work essentially boils down to two things: desire and disappointment […] The honeymoon hotel is a space charged with anticipation, and desire. I like to put my character through the rituals that would otherwise play out in these spaces with two people – the preparation, and then watch as disappointment unfolds. Solitude and loneliness are big themes. I’ll only ever appear alone.” Juno Calypso.

The photographic work has a really beautiful almost ethereal feel to it. I would have assumed these places were sets if not told otherwise. Calypso described the resort as clearly being dreamt up in the head of a man; solely designed ‘for looking at your lover, or at yourself’. Apparently, Juno saw pictures of the Hotel in Pennsylvania, decided instantly she needed to go there to make work and was on location with her costumes and camera a week later.

The pastel shades and lighting are delicate and pretty, which contrasts against the sexuality Joyce is exploring and the assortment of anti-aging products she is desperately experimenting with.

The juxtaposition Calypso’s single, lonely ‘Joyce’ brings to these honeymoon suites almost creates a humorous tragedy. Joyce is acting out all these rituals that would normally take place between two people, but alone in one the most aesthetically romantic places you could imagine, it’s almost as if she’s in on the joke.

Alongside the exhibition programme was a zine titled ‘FEMALE GAZE’, which was created in collaboration with Go Girl, Golden Thread Gallery and Juno Calypso. The zine was a product of a workshop titled ‘Zining the Female Gaze’, each page was designed by a participant of the workshop. The work created aimed to visually combat the male gaze; edgy, feminist, collage is how I’d describe the resulting zine.

The Honeymoon Suite exhibition was produced in partnership with Belfast Photo Festival.

Juno Calypso was born in London in 1989, and is a London based artist working with photography, film and installation. She developed ‘Joyce’ in 2012, channelling suburban isolation by placing her in garish sets furnished with pastel curtains and plastic food. Her degree show was awarded both the Hotshoe Portfolio Award and the Michael Wilson Photography Prize.  In 2013 The Catlin Art Guide featured Calypso as one of 40 of the most promising new artists in the UK, subsequently shortlisting her for the 2013 Catlin Art Prize. She was British Journal of Photography, IPA Series prize winner in 2016 and her work has been featured in The Guardian, Dazed & Confused and in the projects section of the British Journal of Photography. For her latest project, What to do With A Million Years, Juno staged photographs in a mansion built underneath Las Vegas in the 70s as a shelter from nuclear terror, and currently owned by a mystery group attempting to achieve immortality.