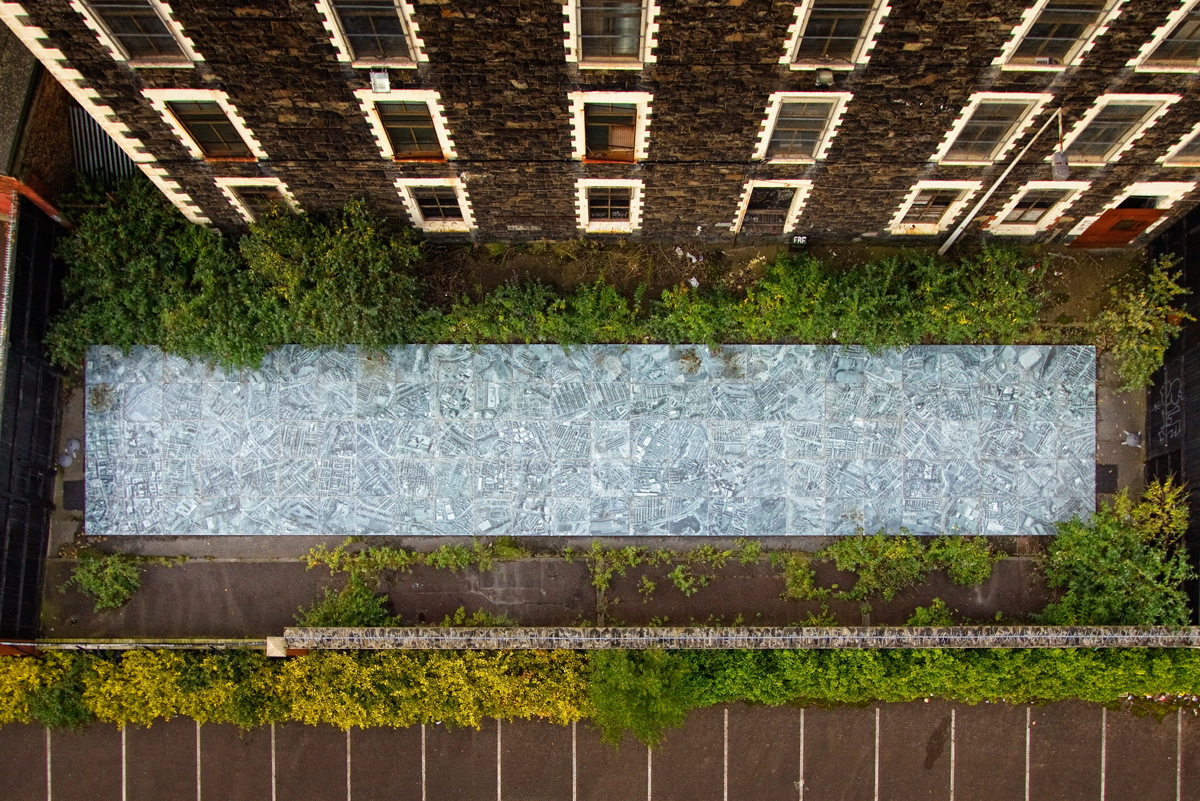 Eight years ago today on the 11th July, we opened Ambulatorio Belfast by Oscar Muñoz to the public at the Crumlin Road/Flax Street interface – meaning the interface itself was opened to the local communities for the first time in decades. Today we look back and celebrate the story of how this extraordinary temporary public art intervention within one of Belfast’s most contentious interfaces came to be.

How did the project begin?

Ambulatorio Belfast would not have happened without the Draw Down the Walls project: a collaboration between North Belfast Interface Network (NBIN), Lower Shankill Community Association (LSCA) and the Golden Thread Gallery (GTG).

Draw Down the Walls was created to imagine a city without barriers. North Belfast is no stranger to the news, but stories were generally focused on the negative and did not reflect the growth in positive relationships being built between communities. Bringing an international artist into the mix encouraged residents and visitors to see the area differently and provided opportunities for young people to have creative involvement in the social decisions that affected their lives.

His experience of working in another conflict zone put the local into an international context, providing a unique window of opportunity to spotlight the relationships that are being built between historically divided communities as we move towards more hopeful times.

While Oscar’s work subtly alludes to the impact of the war in Colombia – another region immersed in political and social turmoil – his themes have a more universal appeal, exploring themes of memory, human loss and impermanence.

Muñoz reinforces this: “My work today arises from my interest in understanding how a society comes to accept war – or rather, a dark and corrupted succession of wars over more than 50 years and which have not yet ended – as part of the routine of living, where both the past and the present are plagued with daily violent events which are persistently repeated”.

In February 2012, Oscar Muñoz was invited to visit Belfast and meet communities from both sides of the interfaces.

As a response to this visit he developed Ambulatorio, a site specific installation using aerial maps of North Belfast sealed under a layer of cracked glass.

Ambulatorio was initially created using aerial photography of Cali in Colombia.  In Ambulatorio Belfast, Oscar transformed the ‘no man’s land’ between the two barriers that separate the Crumlin Road and Flax Street. The artist installed a unique view of north Belfast at ground level, involving a series of photographic tiles across 120 feet between the two interface gates.

Peter Richards, GTG Director recalls ‘Through the gallery I have had the privilege of working with many incredible people on many wonderful projects. But Ambulatorio Belfast still stands out as a truly special moment – a coming together of the best of people, to make this happen, regardless of obstacles.

I have so many memories of the project, some very vivid – such as the whole install team, myself included, sat on sandbags weighing down bolts whilst the adhesive set, in the lashing rain, to level out the panels!

But rather than me go off into sharing all my memories, I’ve chosen an extract from one of the texts in the catalogue; a transcribed conversation between the key project partners Breandán Clarke from the North Belfast Interface Network Ian McLaughlin from the Lower Shankill Community Association and Ruth Graham from the GTG about the reasons for getting involved, how it connected with the work they do and how Ambulatorio Belfast  impacted on the residents of interface areas.

Imagining a City Without Barriers

Ruth:    I’m the Development Officer for Golden Thread Gallery and our involvement with Ambulatorio Belfast began with Draw Down the Walls.  When Peter Richards, the Gallery Director, was invited to pitch an idea for the Cultural Olympiad as part of the London 2012 Festival, it made sense to start with Draw Down the Walls and invite an internationally respected artist to make a proposal that would mean something to residents of interface areas.

Ian:      The Lower Shankill Community Association was formed in 2000.  Part of the work we do is to motivate our community to get involved in the regeneration of their area and the decisions that affect their lives.  I’ve been involved with LSCA at various levels from 2000 and have worked here since 2009.  Ambulatorio Belfast came to the fore through working relationships developed from the North Belfast Interface Monitoring Group, leading to Draw Down The Walls which, in turn, led to our collective involvement in the project.

Breandán: North Belfast Interface Network is one of the driving forces behind Draw Down the Walls and by using some of the conversations within Draw Down the Walls as a starting point, we were able to widen the context of the project to imagine a city without barriers, where the barriers were recognised as not being solely physical.  The opportunity to realise a project as part of the Cultural Olympiad was an ideal way to increase our impact on both a regional and international level.  Ambulatorio Belfast allowed us to engage residents living close to an interface that has been closed for almost 30 years and look at how it could be temporarily opened to allow this project to happen. We needed something people could connect to during what is historically the most contentious time of the year. Creating an artwork with an international artist, being part of the Olympics and seeing a good news story from north Belfast were all factors in increasing residents’ confidence to participate.  It also allowed residents to participate in community relations activity without really thinking about it: they were simply taking part in something together.

Ian:  It was also an opportunity for our residents to connect with London 2012, which had not impacted on Northern Ireland as much as it had with other areas of the United Kingdom.  By connecting with the project, ordinary community members felt a sense of pride through being “involved” in London 2012.  We also used the project as an opportunity to open another gate for the duration of the exhibition, funnily enough in Columbia Street, to make it easier for our senior citizens to visit the project.  This was actually requested by people who attended a consultation meeting before the artwork was installed.

Ruth: We found that the project introduced us to new partners and confirmed our view that high quality art can change the way people think about their communities.

Breandán: The feedback has been overwhelming, from local residents to media reports and reviews as well as being a live topic on Twitter and Facebook for the entire summer. The conversations generated within the community relations sector have gone to the most senior levels of government in Belfast and it has been benchmarked as a model of good practice by Belfast City Council & OFM/DFM.  The project was launched by DCAL Minister Carál NíChuilín and supported by DSD Minister McCausland & DOJ Minister Ford, demonstrating that Draw Down the Walls, by uniquely using contextual art to engage communities in community relations activity, can affect real change.

Ruth:    I spent a fair bit of time on the site so for me, the responses were first hand.  Most of them were positive and most were visitors the local area.  Comments ranged from, “I’m going to bring the wife to see this” to “why don’t they keep these gates open?” to “where’s the art?”. Most poignantly there was one visitor who had not been near the site since his brother was shot close by.  He told the invigilators that it was important for him just to be in the space. The project encouraged discussion about the past, the artwork and about barriers in general.  Art galleries can be silent – like libraries  – with Ambulatorio Belfast there was contemplation AND talking.

Ian:  We have had very positive feedback from everybody who was involved in the project and from those who visited Ambulatorio Belfast.   There were also some very interesting stories from our elderly visitors who vividly remember a North Belfast without barriers.

Ruth:    I felt a difference when I returned to the site after being away for a week or two.  The site itself felt charged with layers of meaning and looking at Ambulatorio Belfast from a fresh perspective revealed an element of the project that can only be described as poetic.  In terms of real difference – yes, communities are talking more about how easy it should be to open more interfaces and there seems to be a desire for meaningful change, but there is a long way to go.

Breandán:  Change began as soon as we started to discuss the potential of the project. The difference was that there was a resolute undertaking from everyone that whatever we did, it had to be embedded in the North Belfast community. To realise the project we had to get access to a space that had been closed for 30 years, we had to broker keys, then, with consent from residents, have a doorway cut into a steel barrier, so the difference had already been made. The space has changed forever both physically and contextually and so has the relationship between the communities. The next step is to gather the learning from the process, evaluate what was achieved and look at what we could have done better. People are talking about the future of these structures and the conversation has also begun about how we can use art to “create the conditions to imagine a city without barriers” when we use it contextually and with relevance to the audience. The real ownership of Ambulatorio Belfast and its legacy are the residents of Ardoyne/Shankill-Woodvale.

Ruth:    At the moment we are de-installing the artwork.  It was never meant to be permanent because that would freeze the space in some sort of limbo where the exhibition would always be open but the road would always be closed.  It is possible that we will develop more temporary projects on the same site as a way of building on the interest generated through Ambulatorio Belfast.

Ian:      We should take this opportunity to build on the Ambulatorio project to create the conditions whereby interface barriers are consigned to the past.  Draw Down the Walls is open!

Ambulatorio Belfast, commissioned with the London 2012 Festival in Northern Ireland, was well documented at the time, in the media:

And a beautiful publication was created which is still available to buy – sales support the work of the Golden Thread Gallery.

Ambulatorio Belfast was a project which created a space that gave people the freedom to explore the artistic value of the project and allowed people to experience, and participate in, an artist’s vision of a city without barriers.

And it showed the power of art as a force with huge civic importance. We look back on it today, eight years on, with pride and knowledge of what communities coming together in Belfast can achieve.