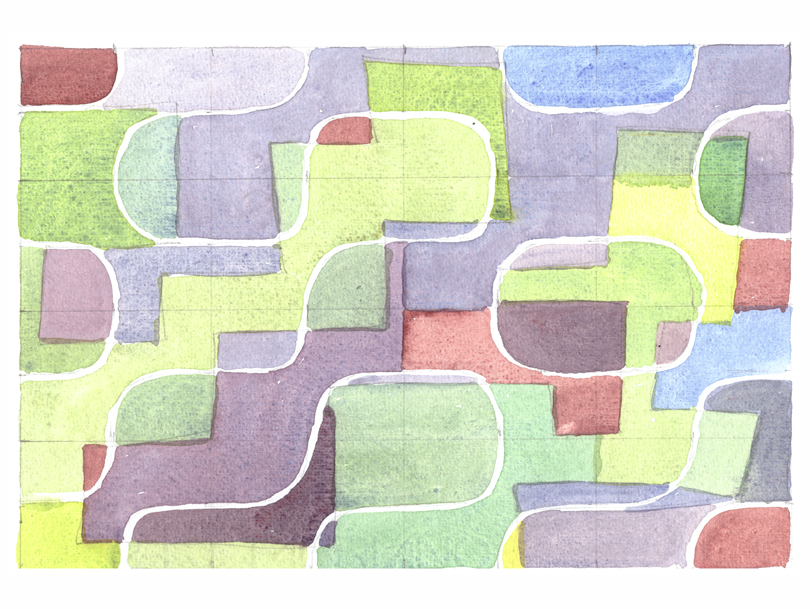 A solo exhibition by Gary Shaw

ReRun is an exhibition of prints produced from watercolour paintings and ink drawings made by local artist Gary Shaw over the last fifteen years. They have been selected from three series of works which consider different approaches to making art.

Many people find abstract art difficult to grasp and think of it as only accessible to people who are familiar with what is often considered to be an elitist practice. Gary Shaw’s decisions about painting often come from a desire to make his work “readable” by basing it on signs and symbols that can be readily interpreted.

The first series consists of paintings which use nautical flags. These flags are used to convey messages, each representing a letter of the alphabet. The paintings, while having the appearance of pure abstraction, spell word, phrases and, in some of his larger paintings, entire essays. Messages are thus hidden in the images.

The second series is based on a mathematical pattern system developed in the seventeenth and eighteenth centuries by Sebastian Truchet. His “Truchet tiles” are familiar, as they are used in many designs seen in our everyday lives.

The black-and-white ink drawings in the most recent series differ from the rest of the exhibition, in that they do not rely on any system, but are based on an intuitive drawing practice. While they are also abstract in form, they often suggest depictions of three-dimensional objects, encouraging the audience to make decisions for themselves about what they might represent.

Gary Shaw lives and works in Belfast and has exhibited, in solo shows and group exhibitions, in Ireland and internationally, including the UK, Canada, USA, Germany, Australia, Spain and China.