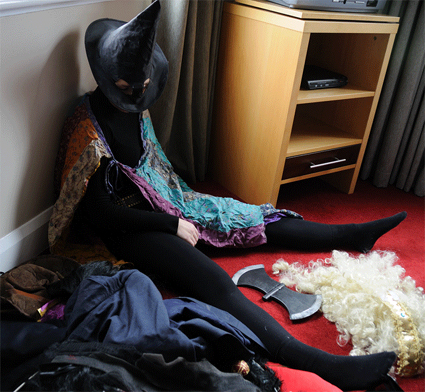 Carnival Mashups considers the Halloween carnival in Derry as a crack in the foundation of everyday society. Through this fissure erupts alternative histories, temporalities and narratives. The costumed chaos of the masquerade reveals as much as it conceals, providing a distorted lens through which to view the complex fears, desires, loyalties and longings of a ‘post-conflict’ society.

Hybrid Halloween follows a stranger through the streets of Derry late on Halloween night as she attempts to assemble a costume from lost and discarded costume elements. A related series of photographs continues the narrative: unsatisfied with her first attempt, she tries out different costume configurations using the same elements, based on what she has seen the night before. Without an understanding of the symbolic baggage of the costume fragments she has gathered, she fails again and again to fit a satisfactory alternative.

Riot Grrrl is part of a work in progress; a preliminary investigation into the connections between the carnival and the riot/revolution. Both seem to create a special temporality, outside of the teleology of modernity. The investigation begins with a stylised recreation of the events of Halloween, 1993 in Derry when news of the Greysteel massacre spread throughout the town and sparked off a costumed riot.

Four ‘guides’ to the festival are presented book form (The Vampire, The Hybrid, The Imposter, The Minstrel / The Volunteer). Each takes a popular costume or costume-type as a starting point to explore a particular theoretical path through the carnival.