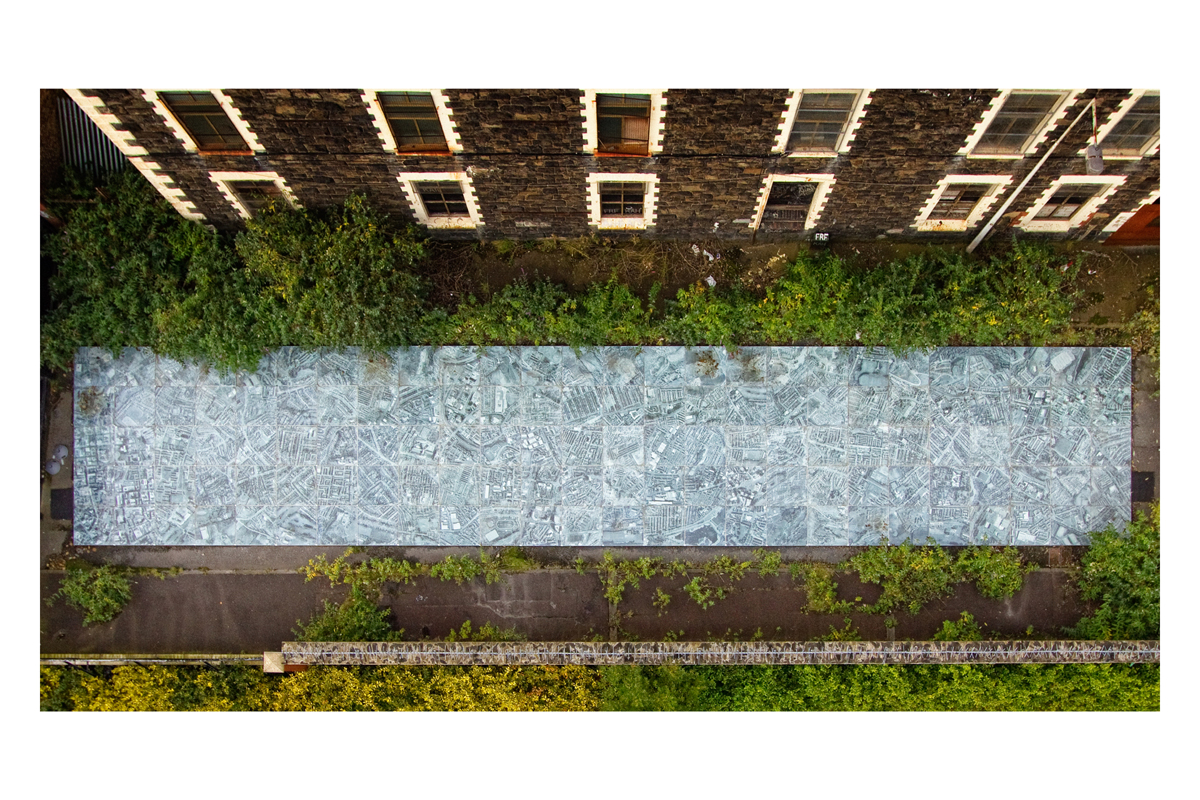 It is six years since Ambulatorio Belfast was unveiled at the Flax Street / Crumlin Road Interface. This public art installation by Oscar Muñoz was commissioned by Golden Thread Gallery on behalf of Draw Down the Walls, as part of the London 2012 Festival. This current exhibition provides an opportunity to reflect on the legacy of the project and view the powerful visual record that remains.

Draw Down the Walls is a collaboration between North Belfast Interface Network, Lower Shankill Community Association and Golden Thread Gallery which was designed to create the conditions to imagine a city without barriers. The artwork was temporary, but it led to memorable conversations as well as demonstrating that creative thinking, combined with community involvement, can open gates and draw down walls.

Some of elements have been brought together in a fully illustrated book about the project, with essays by Slavka Sverakova, Andrea Theis and Peter Richards, along with stunning photographs of the artwork and a transcribed conversation with Ian McLaughlin, Breandán Clarke and Ruth Graham from the Draw Down the Walls team.

It was an exceptional project to be involved in and we are delighted to offer you an opportunity to view images from the project.

Ambulatorio Belfast
Golden Thread Gallery was invited to make a proposal to the Cultural Olympiad as part of the London 2012 Festival in Northern Ireland. The proposal was to connect an internationally recognised artist with Draw Down the Walls – an ongoing collaborative project between North Belfast Interface Network, Lower Shankill Community Association and Golden Thread Gallery designed to imagine a city without barriers. Oscar Muñoz, an artist from Colombia, was top of the list.

In February 2012, Muñoz was invited to visit Belfast and meet communities from both sides of the interfaces with a view to developing a temporary site-specific artwork that was relevant to the residents of interface areas in north Belfast. As a response to this visit he developed Ambulatorio, a site-specific installation using aerial maps of north Belfast sealed under a layer of cracked glass. Ambulatorio was initially created using aerial photography of Cali in Colombia.

For Ambulatorio Belfast, he transformed the ‘no man’s land’ between the two barriers that separate the Crumlin Road and Flax Street. His experience of working in another conflict zone put the local into an international context, providing a unique window of opportunity to spotlight the relationships that are being built between historically divided communities as we move towards more hopeful times.

Ambulatorio Belfast was unveiled by the Culture Minister, Carál Ní Chuilín at the Crumlin Road/Flax Street interface on 9th July 2012. The Justice Minister, David Ford and Nelson McCausland MLA for the area also attended in their official capacity. Ambulatorio Belfast was open to the public between 11am and 3pm every day until 4th August 2012. After that date it was open for pre-arranged visits.

The project was an official event of the London 2012 Festival in Northern Ireland.

Oscar Muñoz
Oscar Muñoz lives and works in Cali, Colombia. His work has been exhibited in numerous group shows including the Venice Biennale (2007), Prague Biennale (2005), and Cuenca Bienal (2004). In 2008 he had solo exhibitions at the Prefix Institute of Contemporary Art, Toronto, Canada; the Herzliya Museum, Israel; the Institute of International Visual Arts (INIVA), London, UK; and the Museo Extremeño e iberoamericano de Arte Contemporáneo, Badajoz, Spain.

Draw Down the Walls
Draw Down the Walls (DDTW) is an ongoing collaboration between North Belfast Interface Network, Lower Shankill Community Association and Golden Thread Gallery designed to create the conditions to imagine a city without barriers. DDTW is a cross-interface community relations initiative that uses art and language to engage hard to reach sections of the communities in North Belfast who have not previously engaged in peacebuilding activity. Through detached youth outreach work and artist led workshops, the project has generated new conversations within and beyond its participant group, challenging mindsets and reimagining the potential of interface communities.

Golden Thread Gallery
Golden Thread Gallery (GTG) is a medium-scale, publicly funded, contemporary art gallery based in Belfast that is recognised as having charitable status. It provides a welcoming space for the public to engage with contemporary visual art, and has grown steadily since it was founded in 1998. GTG is recognised for its engagement with recent histories and re-imagined futures: the majority of its programme is engaged with offering the public a contextual experience of the visual art of our time.
GTG is a member of the Plus Tate network, a lead partner in the Draw-Down-the Walls collaboration and is accredited by Investors in People.

The area within which the project is based is one wherein the past conflict and its legacies have dramatically affected the population. The project catchment has experienced disproportionate levels of sectarian violence. The purpose of the organisation is to transform and regenerate interface communities in North Belfast. NBIN aims to achieve the following outcomes using a range of processes: increase participation of local residents in community relations activity; creating stability at interfaces; improving inter-community relations; the regeneration of interface communities.

Lower Shankill Community Association
The Lower Shankill Community Association (LSCA) is a community development organisation that works to empower local residents and to advocate for policies that will benefit those living in the lower Shankill area of Belfast. LSCA is focused on reimaging the area and as well as promoting and ensuring peace. Despite the negative stigma is sometimes associated with the Shankill, LSCA shows the outside world that it is has changed and is a warm and welcoming community. By encouraging residents to cut old ties with paramilitaries and to work with the Police Service Northern Ireland, LSCA has made the Shankill a friendlier place. To further its goal of reimaging, LSCA has removed some of the more extreme paramilitary murals and replaced them with depictions of other aspects of the Shankill culture. This organization works hard to give the Shankill the positive reputation it so rightly deserves.