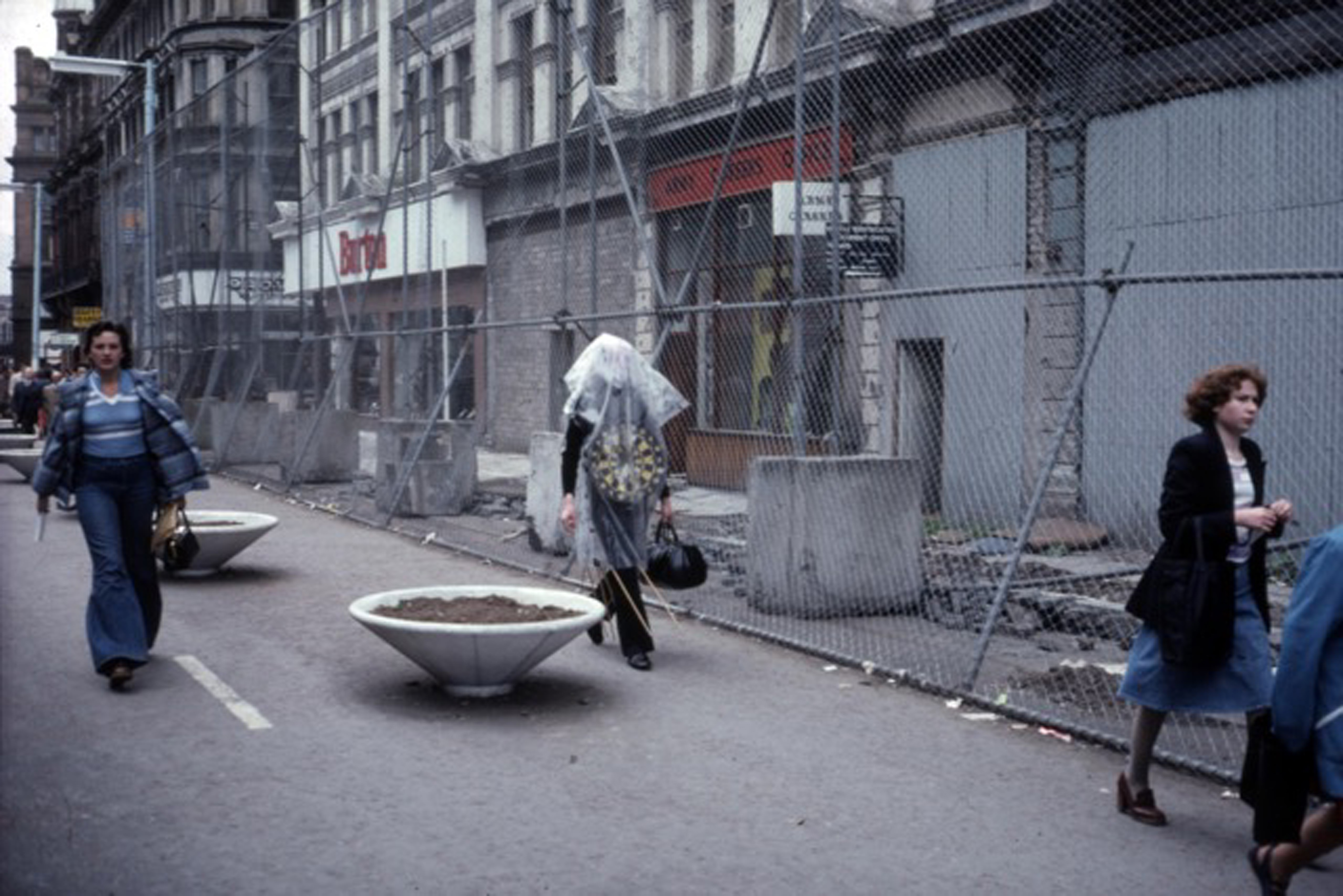 Northern Irish performance art is well regarded and has substantial international networks, in addition to a track record of sustained, experimental practice for the past 40 years. It has established a global reputation for the innovative ways in which it has engaged with the political duality of the “Troubles” and their resulting contested spaces. However, it is still very much an underrepresented narrative, bound up with local history.

There is currently no focused documentary history of Northern Irish Performance Art (as there is with its Welsh equivalent). There is a mere mention of Alastair MacLennan’s name in one of the official Arts Council-commissioned essays on art and the Troubles––nothing more, despite MacLennan’s prolific and internationally regarded practice. His omission from local art history exemplifies that Performance Art is thus far under-appreciated by audiences, writers, and funding bodies in Northern Ireland.

The performance artist Brian Connolly and art historian Christa-Maria Lerm Hayes are co-curators of this exhibition and its related events, featuring a range of the key and influential artists who moved to Northern Ireland in the 1970s (MacLennan), or artists from Northern Ireland (André Stitt, Sandra Johnston, Sinead Breathnach-Cashel, Brian Connolly, and Bbeyond). Other more temporary but impactful presences were Samuel Beckett (his education in Enniskillen and subsequent work in Belfast), Joseph Beuys in 1974, Adrian Hall, Black Market International, Dan Shipsides, Sinead O’Donnell, Brian O’Doherty/Patrick Ireland and selected key members of the Polish, British, and continental European performance art movements. The exhibition is an initial historical survey of Performance Art in relation to Northern Ireland.

One of performance art’s strengths is its ability to provoke, to inhabit the interstices, to remain fluid, flexible, and mobile. Such strategies have enabled it to remain independent and not co-opted by one side or the other in the local conflict. Much of MacLennan’s performance artwork (and that of others) has achieved this. His work Target (1977), literally a going back and forth across the security barriers within the city centre, is an early example. Stitt’s visceral performance actions in response to political bigotry and violence have also resonated through time.

Performance art has been brought into the foreground through projects such as Available Resources (Orchard Gallery, Derry 1991) and Exchange Resources (Catalyst Arts, Belfast 1995 with Connolly, MacLennan and others).

Key individual practices and organisational aspirations eventually led to the establishment of Bbeyond in 2001, an artist-led organisation, which has generated a wide range of international events within Northern Ireland (In Place of Passing, Inbound, Open Relations 1 & 2), while offering a spring board for younger artists and a link to growing international networks outside. Bbeyond continues to host a series of monthly meetings in different locations throughout Northern Ireland, which are open to all performers.

This exhibition and its constituent parts are highly challenging, as performance art’s basic tenet is that it should be seen and experienced live. An exhibition of performance art may well work with performance “relics,” sculptures, and installations; but an exhibition that claims to be a survey also needs to work with scheduled events, recorded performances and archival documentation. Despite best efforts, such a project has to establish itself under the conditions of absence and in the face of inevitable failure.

The Golden Thread Gallery will present a series of documentary artefacts, still photography, video, film, and other archival materials, and will also host a series of performances from key artists such as MacLennan, Johnston, Connolly, and Bbeyond. The global art historical, theoretical, and institutional debates about the appropriate representation(s) of performance art are contested and ongoing. The often collaborative, egalitarian, engaged, and site-specific nature of performance art in Northern Ireland will make this exhibition challenging and rewarding. An accompanying publication will serve to complement Áine Phillips’ recent historical map of Irish performance art in general and provide pointers for interpretation and contextualization. The essay by Christa-Maria Lerm Hayes, with Karine Talec, was developed also as a Toubles Archive essay within the framework provided by the Arts Council of Northern Ireland . A series of educational seminars and potential artist workshops are being planned and will also form part of the exhibition programme.

Alastair MacLennan: Currently Emeritus Professor in Fine Art at the Belfast School of Art, University of Ulster, Belfast. He is one of the UK’s preeminent performance artists. Since 1975 he has been based in Belfast and was a founding member of Belfast’s Art and Research Exchange & Bbeyond. He is also a member of the European Performance Group ‘Black Market International.’ He currently travels extensively presenting ‘actuations’ (his term for performance/installations).

Sandra Johnston: One of the foremost performance artists from Northern Ireland, who recently completed a retrospective exhibition at the Golden Thread Gallery. She also authored a book entitled Beyond Reasonable Doubt about the relationships between legal systems of conflict resolution and the role that performance (art) plays and can play in a contested society such as Northern Ireland.

Brian Connolly: He developed a genre of performance art called ‘install-action’ and has created a series of interactive Market Stall Performances. He has performed and exhibited in diverse contexts throughout Europe, the U.S., and China. He has also initiated and curated events and projects both nationally and internationally. He is a co-founder of Bbeyond and a former director of The Sculptors’ Society of Ireland and Visual Artists Ireland. He established the Belfast International Festival of Performance Art in 2013.

Bbeyond: Bbeyond is a Belfast-based collective, committed to promoting the practice of performance art and artists in Northern Ireland and further afield. It hosts international artists and encourages emerging artists to explore their performance practice.

Christa-Maria Lerm Hayes is Professor and Chair of Modern and Contemporary Art History at the University of Amsterdam. Until 2014 she worked as Professor of Iconology at the University of Ulster, Belfast. From 2007-2011 she was Head of the Research Graduate School there, leading particularly the PhD with Practice programme. She studied at the Universities of Heidelberg, London, Bonn and Cologne, where she gained her PhD in 2000. It was researched with a James Joyce Foundation Scholarship in Zurich and followed by an Irish Research Council Post-Doctoral Fellowship at UCD. She was Visiting Scholar at the University of Cologne in 2012. Her research focuses on word and image studies, particularly the visual legacies of (Irish) writers (Joyce, Beckett, Sebald), also considering performance, the historiography of art (Warburg, Giedion-Welcker) and curation. Rooted in Joseph Beuys studies, she has an interest in sculpture, performance, social practices, as well as post-War art histories. Her publications include the books Post-War Germany and ‘Objective Chance’: W.G. Sebald, Joseph Beuys and Tacita Dean (Steidl 2008, 2011), James Joyce als Inspirationsquelle für Joseph Beuys (Olms 2001), and Joyce in Art (Lilliput 2004). This book accompanied her large, international exhibition on the theme, Royal Hibernian Academy, Dublin. She has curated exhibitions for: Goethe Institut, Dublin; Tolstoy Estate, Russia; MoA, Seoul National University, Korea; Golden Thread Gallery, Belfast; LCGA, Limerick; CCI, Paris; Maagdenhuis, Universiteit van Amsterdam and Van Abbemuseum, Eindhoven.

Brian Connolly is a multi-media artist whose works often relate to ‘place’ or context. He employs a wide range of artistic processes, including performance art, public sculpture, installation art, and collaborative projects. Within one of his Performance Art strategies he entices a ‘non-art’ audience within a Market Stall intervention. His other live works are often place-specific & durational. These performance works, generically entitled “Install-actions,” are often visually elaborate and contain both political and spiritual metaphors. He has made both solo and group performances, and exhibited in diverse contexts throughout Europe, Canada, China, and Mexico. He has also initiated and curated a number of events and projects, both nationally and internationally, and has been involved with a variety of artist-run organizations throughout Ireland including: The Sculptors Society of Ireland, Visual Artists Ireland, Bbeyond, Flaxart, and Moyle Art in Public Places, among others. He is currently an Associate Lecturer in Sculpture, Fine Art at the University of Ulster in Belfast, and was instrumental in gaining major funding for the Interface Research Centre, now the Research Institute of Art & Design, within the Belfast School of Art.