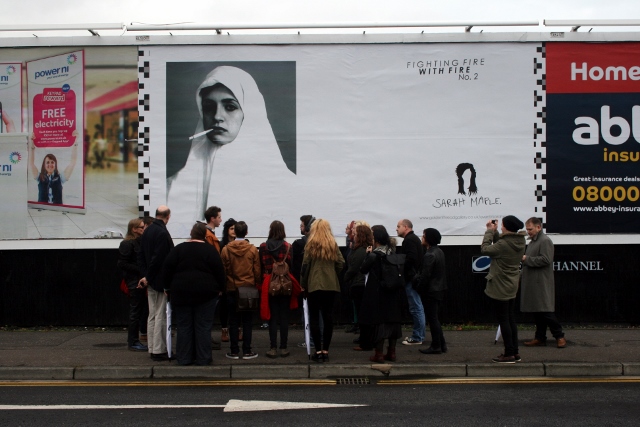 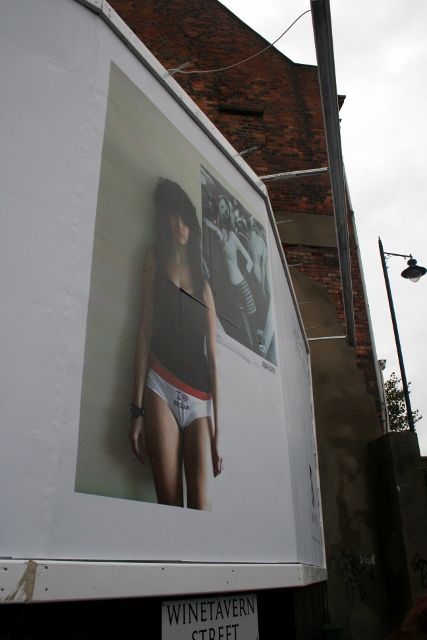 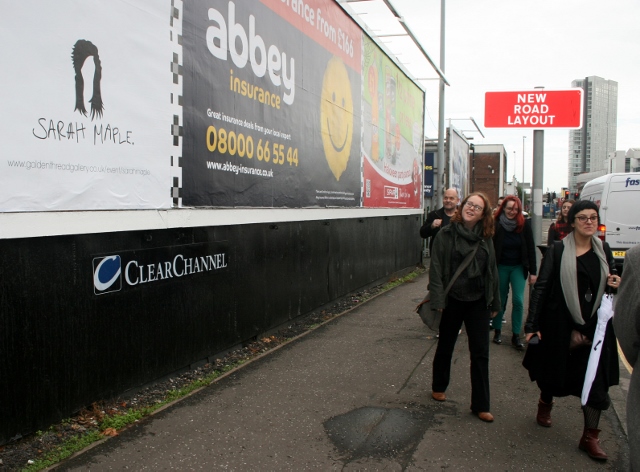 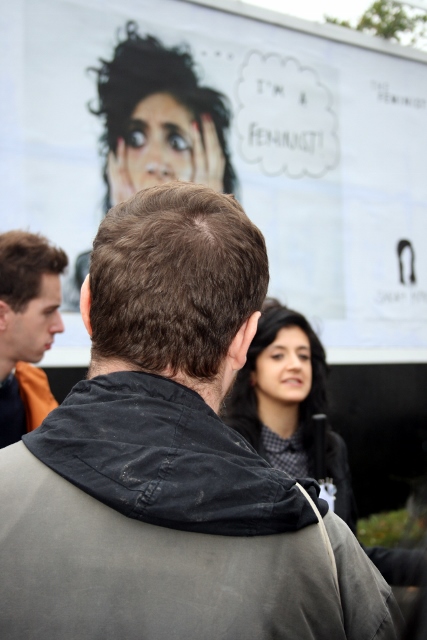 You can’t just put your everywhere marks Sarah Maple’s first solo project in Northern Ireland, and the artist has made sure that it will not go unnoticed.  Curated by Ben Crothers in partnership with Golden Thread Gallery and Standard Utilities, and with the generous support of Arts & Business Northern Ireland, this selection of six key works sits outside of a traditional gallery setting, with the images plastered across billboards throughout Belfast’s city centre.

Maple’s practice – encompassing painting, photography, video and performance – is both provocative and humorous, primarily exploring what it is to be a woman and a Muslim in 21st century Britain.  In this curated selection of photographic self-portraits, we see Maple at her best, standing defiantly in front of the camera, challenging viewers with her unflinching gaze, posture, wit and sexuality.

Praised and critiqued in equal measure, Maple is no stranger to hype and controversy.  Lauded as the “heir to Tracey Emin’s throne”, she has also been criticised for relying entirely upon being “attractive and Muslim”. But all of this is embraced by the young artist, who equally flirts with and challenges the media attention which surrounds her practice.  Maple cannot be pinned down as easily as some may think with her graphic, witty and wholly original exploration of identity, gender, culture and religion, simultaneously sincere and tongue-in-cheek.  She plays the Muslim, the hipster, the princess and the pinup all to equal success in a visually-striking challenging of contemporary stereotypes.

Taking the form of a walking tour setting off from Golden Thread Gallery and leading participants around the surrounding area, we see that Maple has indeed put her work everywhere, unafraid to step outside of the relative safety of the white cube.  Maple has brought her work to the streets, where it perhaps holds the most power, as passersby are unexpectedly confronted with her image – and that signature shock of black hair – time and time again.  There is no escaping Sarah Maple.  She demands that you take notice.

Sarah Maple and Ben Crothers will host the inaugural walking tour on Tuesday 22 October from 1pm – 2pm, meeting at Golden Thread Gallery.  Further tours will be led by Ben Crothers, and maps for self-guided tours are available from the gallery and online. This project devised to coincide with the Belfast Festival at Queen’s is the first of two projects that Golden Thread Gallery and Standard Utilities are working on with Sarah Maple. The second instalment launching on Thursday 27th February 2014, will take the form of a large-scale solo exhibition at the Golden Thread Gallery charting Maple’s working to date.