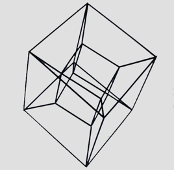 (with)in(the)visible presents the work of two artists – Una Walker and Justin McKeown – dealing with similar concepts but from very different perspectives, one occult the other scientific. Common to both artists work is a dedicated attempt to explore and materialise the space between the world as phenomena and the world as it is interpreted.

Hyperspace is a logical extension of Euclidian three-dimensional space into other dimensions described as n-space. N-spaces can be expressed in mathematical terms, but are difficult to visualise. Una Walker’s work in (with)in(the)visible explores the nature and contradictions of representing four dimensions using drawings, models and projections of three-dimensional models onto two-dimensional surfaces.

Since 2007 Justin McKeown has been developing a series of artworks examining the relationship between the occult, subjective perception and the human propensity for belief. For (with)in(the)visible McKeown has chosen to focus on the subject of mediumship. His installation A Glimpse at the voice of God explores the subtlety with which individuals may be manipulated into relationships with objects, symbols and ideas. This work is contrasted with a series of automatic drawings created through McKeown’s explorations of the practices of psychic mediums who attempt to draw spirits.