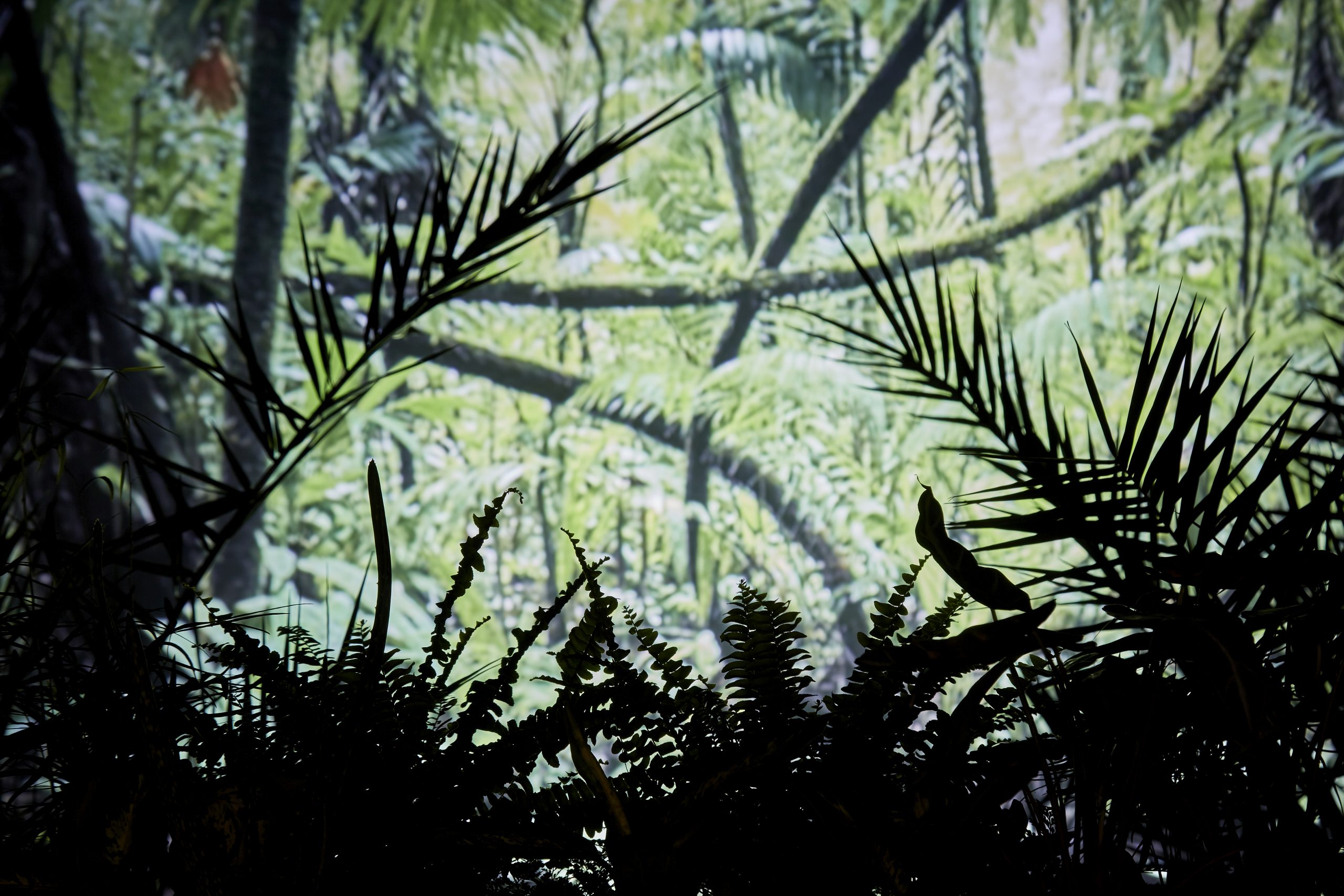 The Really Wild Show is not the show that you think it is. There is a show, but Michaela Strachan isn’t presenting it and what on earth does it mean to be really wild anyway?  Join us as we explore internet jungles, wild birds and exotic plants with Iain Griffin and his Really Wild Show.

Did you ever fall asleep listening to the sound of the jungle? Or do yoga to the noises of the rainforest? For this exhibition the artist places live potted plants with unspecified jungle clips from YouTube and a therapeutic soundtrack of wild birds and animals.   It is one of many hundreds of jungle videos created to help viewers to relax and escape from their day to day lives.

There is some echo of the work of Henri Rousseau (1844 – 1910), best known for paintings set in exotic fantasy jungles, such as The Dream and Surprised Storm in the Forest.  It was widely believed that Rousseau sourced his material first hand whilst on military service in Mexico.  However, it is now clear that those suggestions were unfounded and that Rousseau had never been beyond the borders of France, never mind seen a rainforest.  Rather, his primary sources for the scenes of his jungle paintings were plants from the Botanical Gardens in Paris.

At one time our indigenous plants were wild and “wilderness” probably didn’t exist before we named it.  Griffin plays with these ideas without trying to provide answers.  What he does reveal is a sense of what lies beneath the suspension of belief.

Iain Griffin (b. Harrogate 1989) is a visual artist currently based in Belfast, N. Ireland. He graduated with First Class Honours in Sculpture from the National College of Art and Design Dublin in 2011. Iain has exhibited nationally and internationally in exhibitions including: N.O.W.H.E.R.E, Interview Room 11, Edinburgh (2016); In Flux, Brunswick Street Gallery, Melbourne (2016); and to Use as Capital, One Night Only, Oslo, Norway (2014). Sold Out was recently shortlisted for the 2016 edition of the EVA International Biennial, Limerick.

Griffin’s use of a three dimensional foreground and background roots the work in the Australian colonial tradition of landscape painting. In this genre, painters adapted what they saw to fit with what they imagined, which meant that scenes were frequently amended to reflect the English countryside rather than the rugged scenes of the Australian colony.  In The Really Wild Show Griffin plays with formats of editing the display of natural landscape.

Griffin is interested in the templates used to convince the spectator that they are witnessing something that is authentic.  The behind-the-scenes section at the end of a nature documentary is one example.  The sense of “reality” is increased by showing footage from the making of the documentaries. Though, of course, this footage is edited too, the viewers become involved in a constructed suspension of belief.  Likewise, this exhibition makes the construct visible.