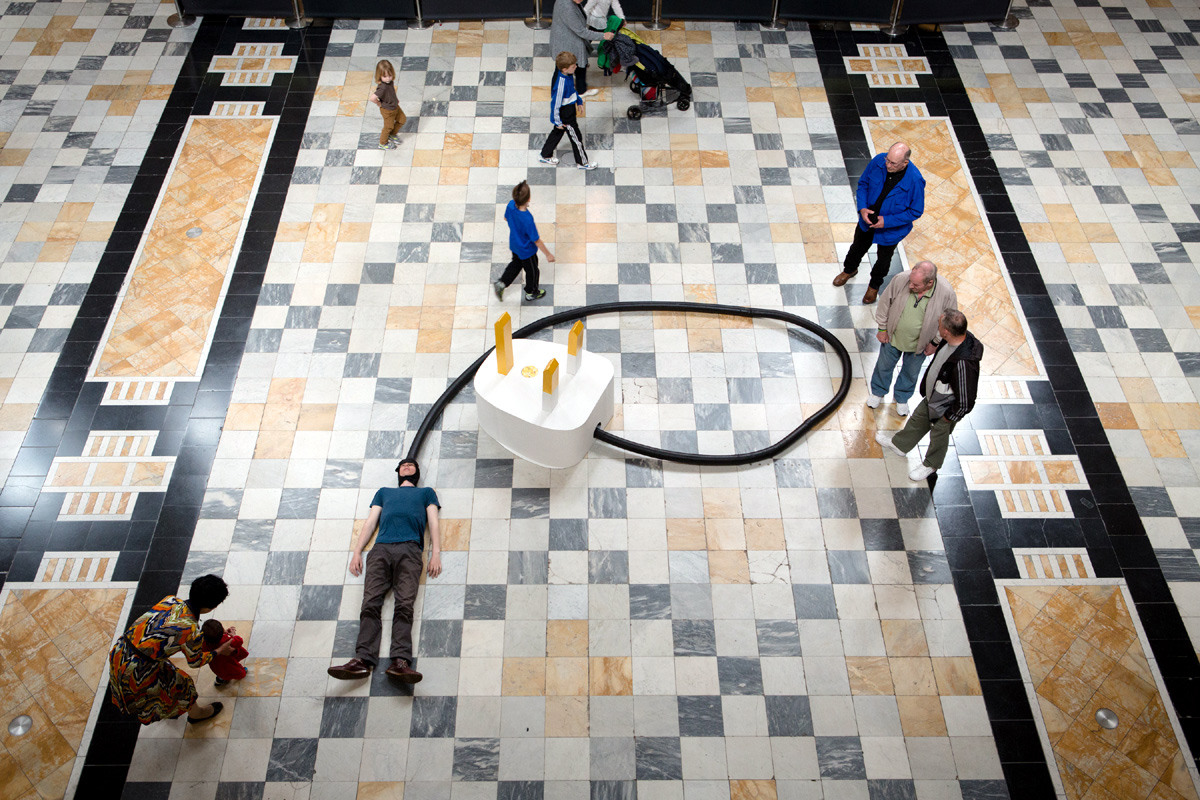 Based in Glasgow and originally from Northern Ireland, David Sherry’s career has been shaped by his research on the banalities of everyday life. Sometimes described as undermining, Sherry’s work calls out the societal norms of small talk, social etiquette and accepted cultural codes using performance, drawing, painting, video and sound. Sherry is known for using performance as a tool and cites ‘playfulness’ as being central to the development of his work.

Sherry’s work acts like a list and is often described or presented that way, a list of thoughts, ideas, moments. These lists add to his on-going research questioning basic learned behaviours. The work is often humorous, absurd and surreal, yet suppling a unique commentary on real social issues and accepted societal norms. Sherry actively utilizes normal experiences encouraging us to take a moment to reflect on our own attitudes and behaviours also seen in those around us.

The Philosophical Society represents a turning point for Sherry, a shift to large-scale sculpture and the use of fabricators to enhance the finished look of the work. This contrasts with previous sculptural works such as Total Crap, which deliberately undermined the notion that anything made by an artist held a quintessential value. Sherry has created a series of new works which relate to the current social and economic climate, while retaining his signature humour and relatability.

Post-War Absurdist art seems to easily resonate with the themes and ideas presented in The Philosophical Society. Absurdism, as a theory, encapsulates everything from the intentionally ridiculous to the belief that we exist in a meaningless chaotic universe. Twisted, a concept which features frequently in Sherry’s on-going narrative, is a concept often associated with the Absurdist movement. Artists such as Yayoi Kusama and Peter Saul’s work in the tumultuous 1960s feel uncomfortably relevant to today’s uncertain political climate. The recurring Twisted Ladder work continues to be a cornerstone of Sherry’s practice. The irregular shape and garish colours provokes us to question the possibility of our surroundings and our actions in the everyday. Sherry’s absurdist mutilation of simple objects defies rationality, further contemplating accepted cultural codes and basic learned behaviours.

“To hug a stranger in the street is to observe a set of unspoken social rules unravelling. To fly several kites at once is not only extremely difficult but it also ‘cocks a snook’ at the limitations of the real world. Many of my works are made from planed and altered social experiences and observe our casual interactions from new perspectives.” David Sherry, 2016 Sherry graduated with an MFA from the Glasgow School of Art in 2000. He has had solo exhibitions at: Outpost, Norwich; Summerhall, Edinburgh; Catalyst Arts, Belfast; Glasgow Museum of Modern Art; and Tramway’s project space, Glasgow. In 2003 Sherry was selected to represent Scotland at the 50th Venice Biennale, and his work is held in many collections including the Glasgow Museum of Modern Art. He performed at the Liverpool Biennial and Manifesta 11. His work has recently been shown at First Site, Colchester, Jose Campos Contemporary Arts Center Azores and Glasgow International Festival of Visual Art 2018.

The exhibition is accompanied by a catalogue which documents Sherry’s work to date and the evolution of his practice placing it within the context of sculptural history.