Something Forever
An exhibition of works by Ian Charlesworth, and Eoghan McTigue 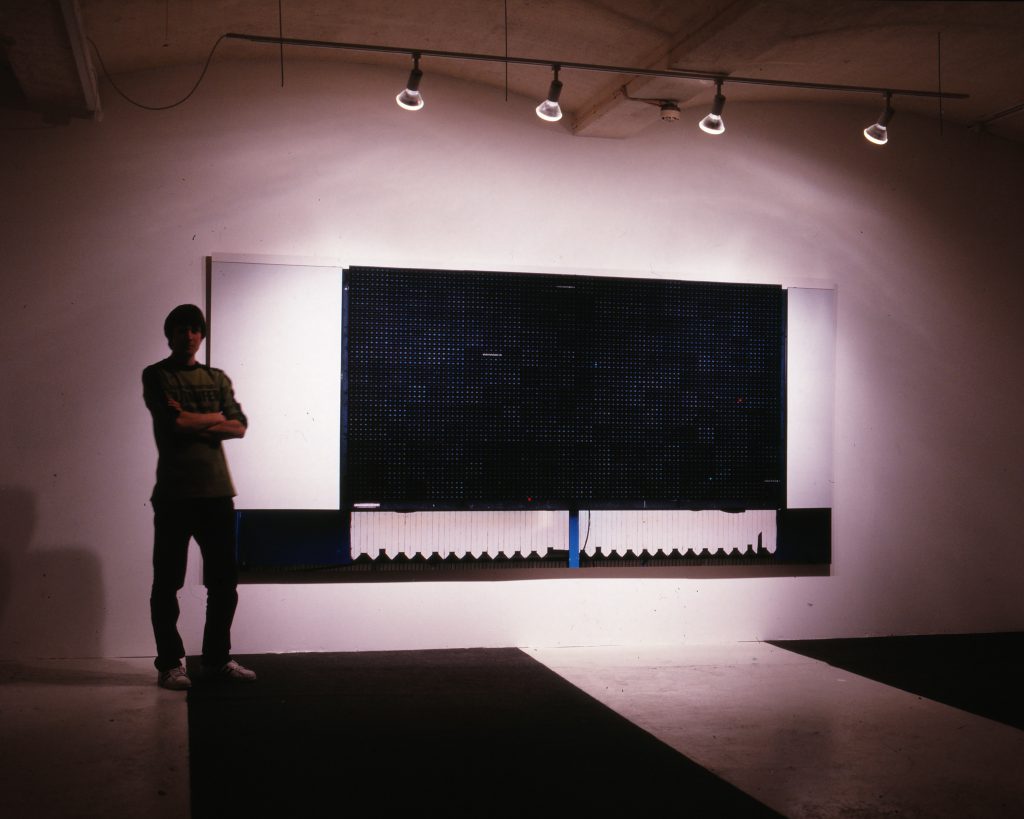 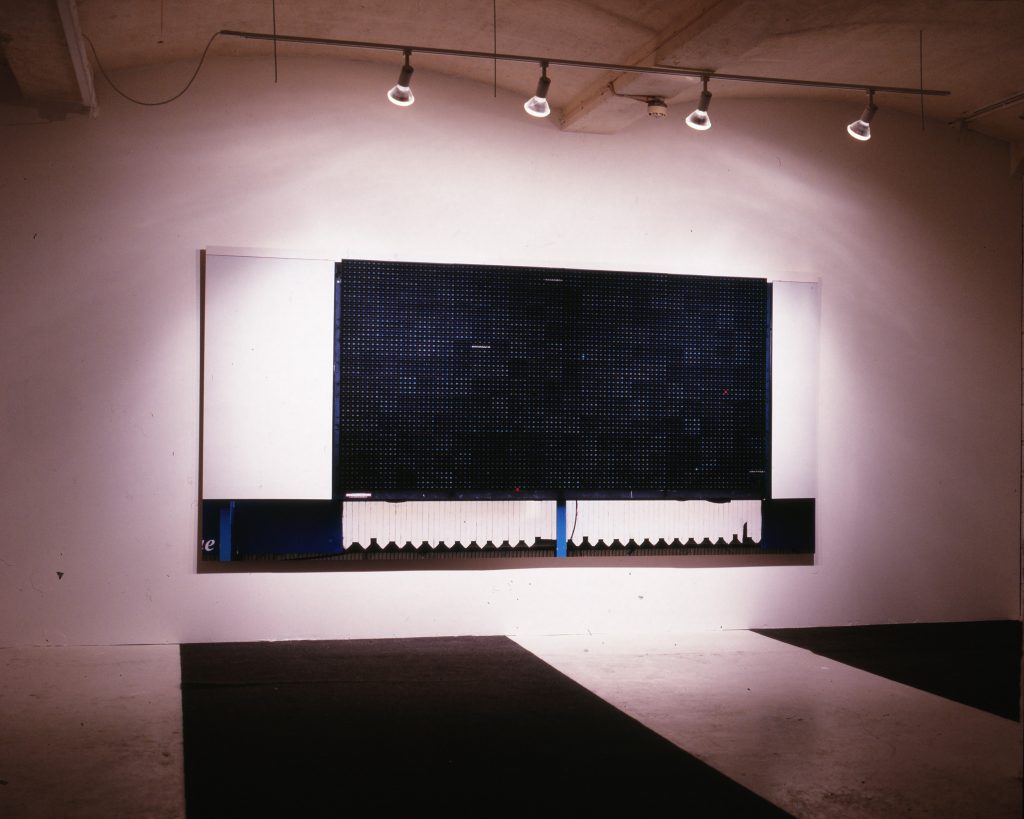 In reviewing this photograph, I felt rather like the heroine in Brian Moore’s The Lonely Passion of Judith Hearne, scouring Belfast in search of a sign. For Eoghan McTigue’s piece, displayed in the Something Forever exhibition at the Golden Thread Gallery, takes as its subject the electronic advertising screen which stood above Shaftesbury Square and now adorns Windsor Park football ground. The photograph, which is almost to scale, shows the sign displaying its test card. This image comprises a monochrome grid of black squares and shifts in tone that appear as a kind of diffused or formless chessboard, which challenges the viewer to a game of critical positioning. Additionally, the surface is occasionally punctuated by a random matrix of coloured lights. Perhaps one of the points of this work, in opening an interpretative space between its surface and the place of the viewer, is to foreground the more general signposting of the visual image and its critical interpretation. The huge televisual screen also raises questions about just how far an original and unmediated response is now possible to any work of art. It is worth considering, therefore, whether this photograph only serves to elaborate in a mechanistic fashion the ground rules of the conventional interpretative process; though I think otherwise.

Walter Benjamin once asserted that ‘history breaks down into images, not into stories’. In constructing what he termed the dialectical image, Benjamin sought to undermine the idea that the image is a free-floating or displaced instance. In the dialectical image the past collides with the present historical context of the viewer in a reciprocal illumination, wherein not only the true historical character of the past but also the accurate understanding of the present are revealed. It is in this spirit that I wish to consider McTigue’s photograph.

The advertising screen that is the subject of this piece began its life high above Shaftesbury Square as a visual focal point of the regeneration of the Golden Mile of shops, bars and restaurants in Belfast. In the postmodern ordering of city space, we are all supposedly placed in the position of flaneur, as urban viewer, in a total arcade of dreamlike commodities and images

Furthermore, J.G. Ballard somewhat mischievously contended that contemporary novelists, such as John Updike or Saul Bellow, can no longer compete with today’s ‘greatest producers of fiction’, huge advertising agencies. In this light, McTigue’s photograph also bespeaks something of the commodification of visual art, the subsuming of its artistic autonomy and integrity within an image-ridden and aestheticized postmodern culture. For, despite the viewer’s engagement with the surface of McTigue’s photograph, we almost expect that at any moment all kinds of commodity products will appear inscribed upon the screen to complete its meaning and overwrite artistic usage with economic function.

The current situating of the screen in Windsor Park, the home of Linfield and the Northern Ireland team, also highlights something fascinating brought into focus by the history of this photograph. At the heart of Windsor Park, a central national and cultural signifier, specifically for Unionism, is this other signifier, a sign that can seemingly signify everything and nothing and which disturbs the supposed certainties of national signification. It is not only the work of art or the viewing subject but also our concept of the national itself, which is undermined by late capitalism and the commodity. McTigue’s photograph represents this seductive nullity, a seemingly transcendental void which impels our utmost consideration and historical appraisal. For the word ‘screen’ itself suggests not only the display but also the secretion of meaning, which it is the task of the dialectical image to uncover.

Source Reviews: Show Me A Sign by Aaron Kelly