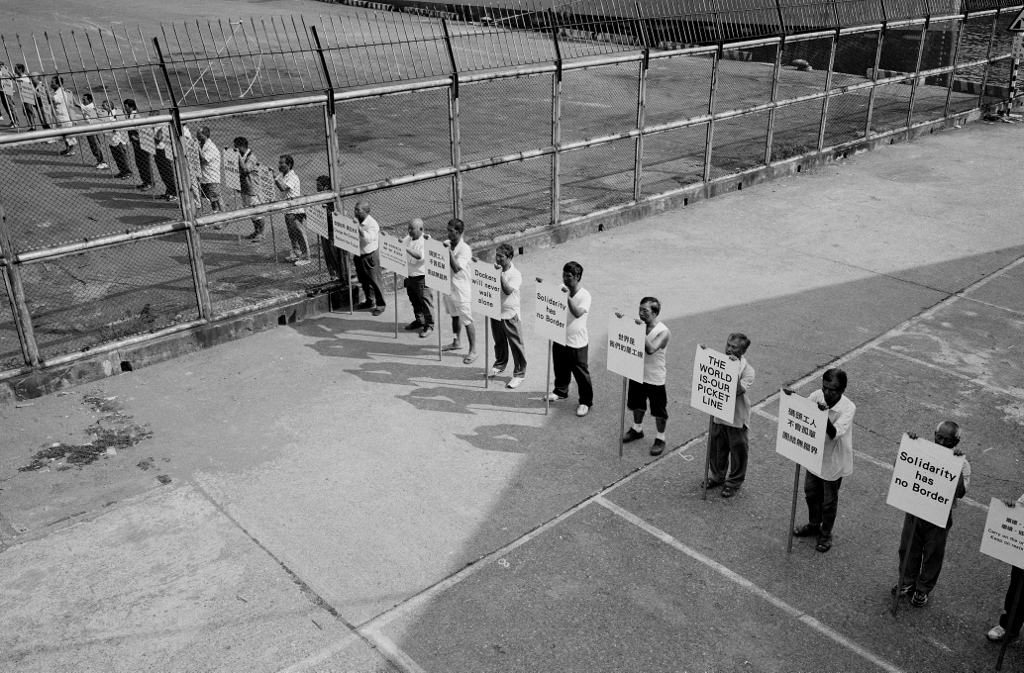 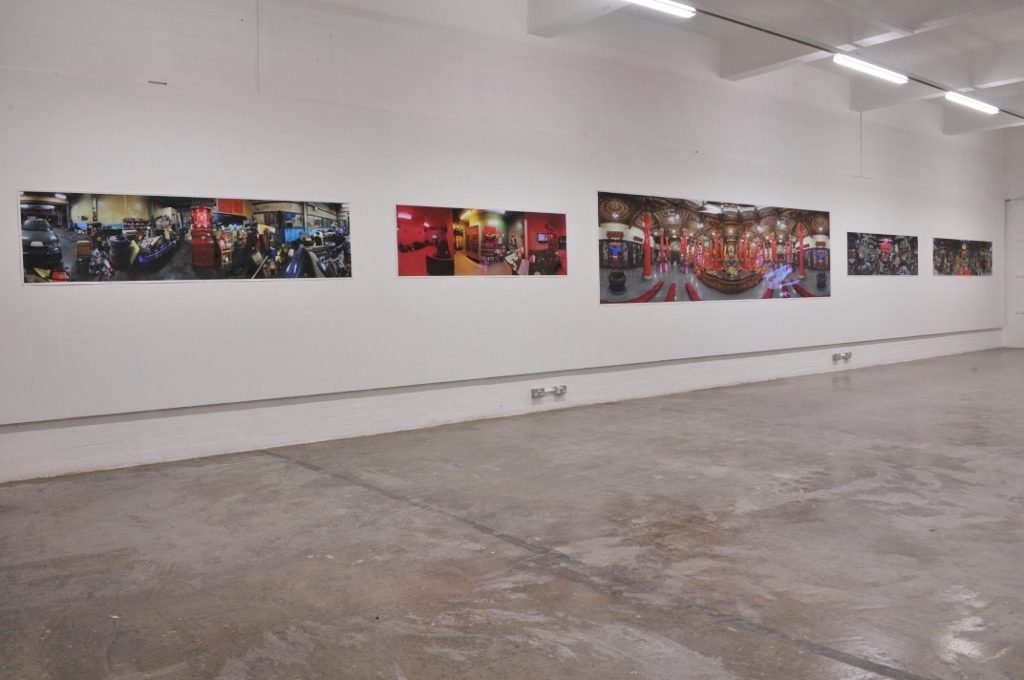 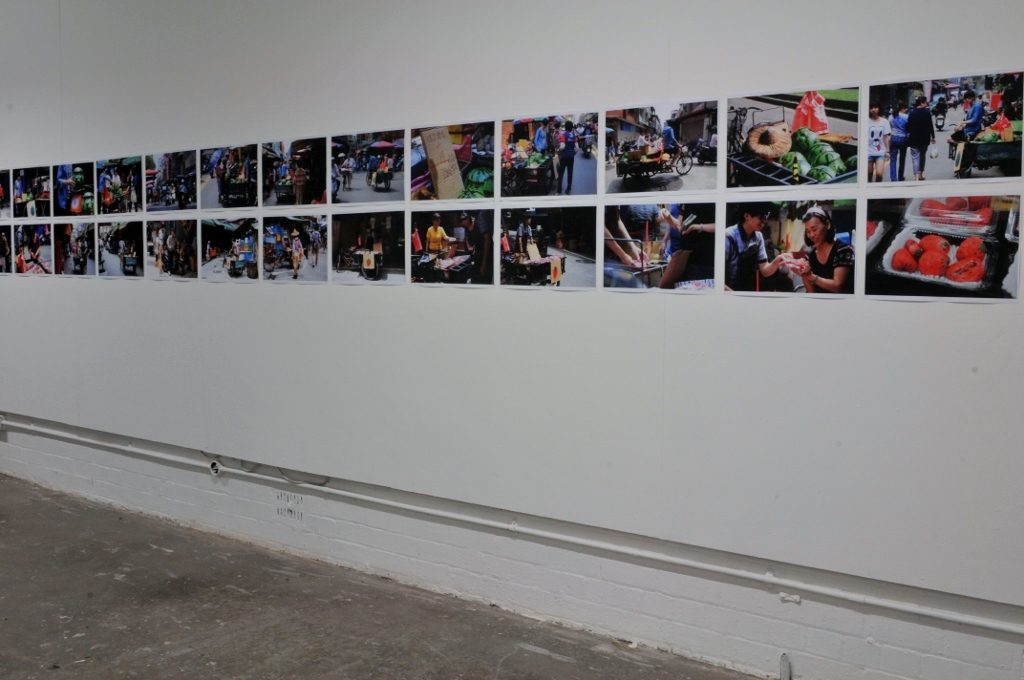 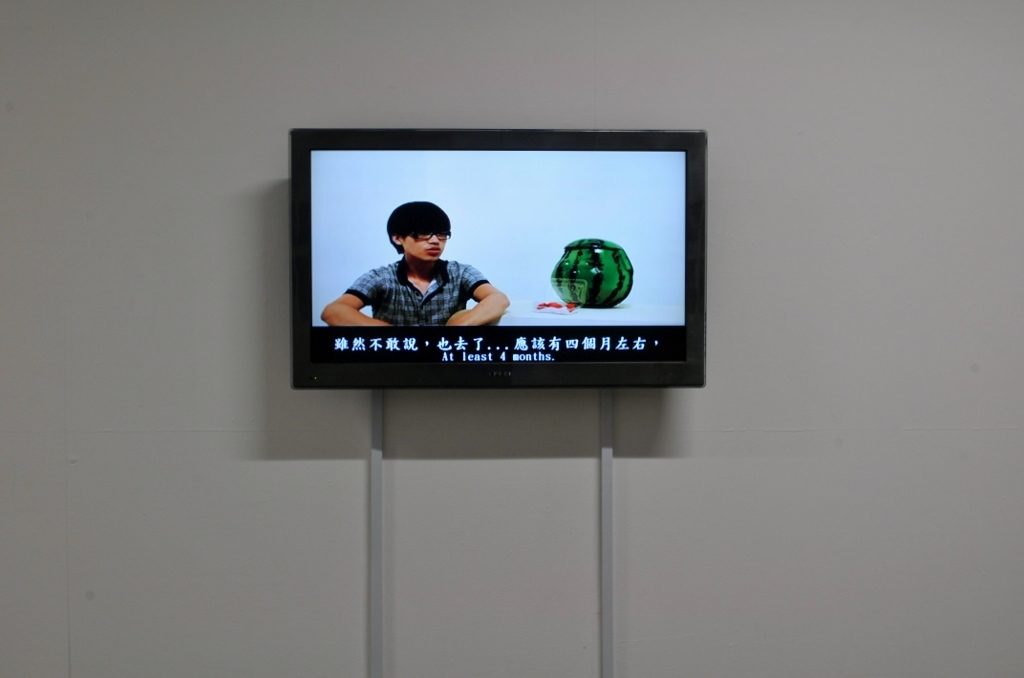 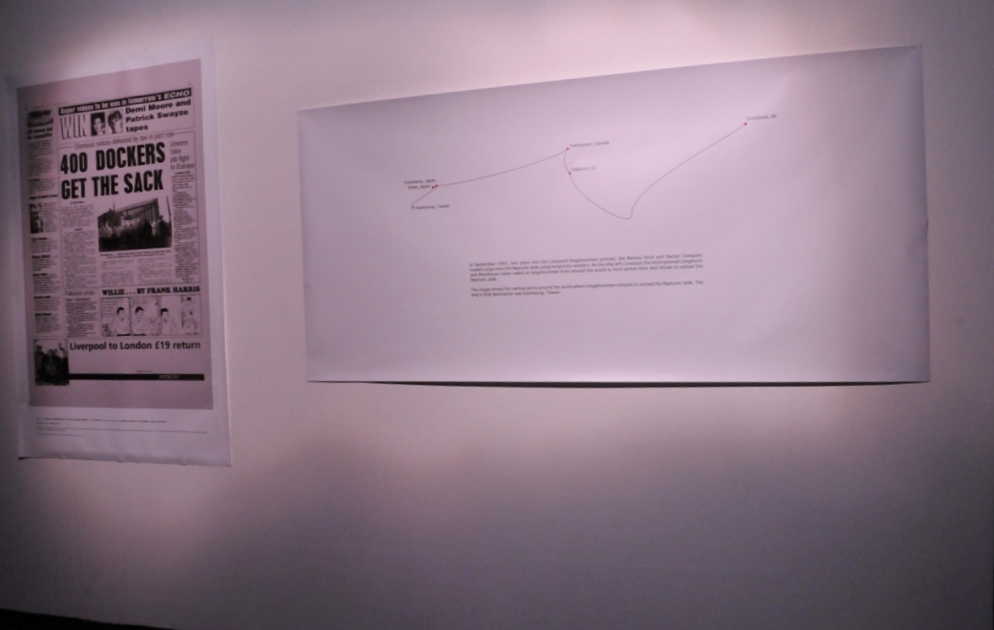 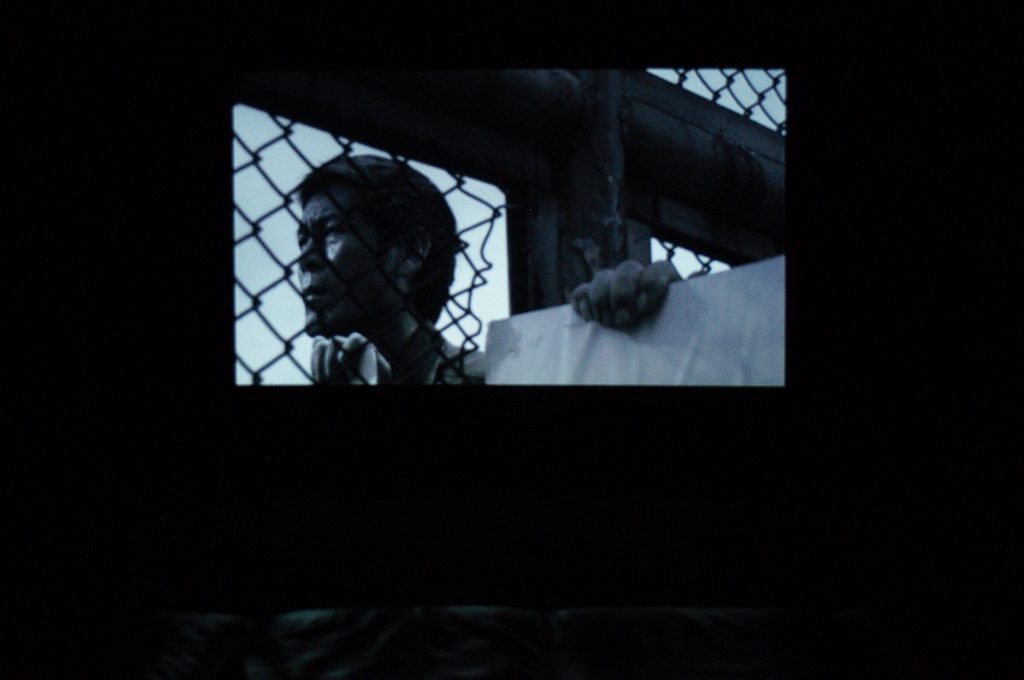 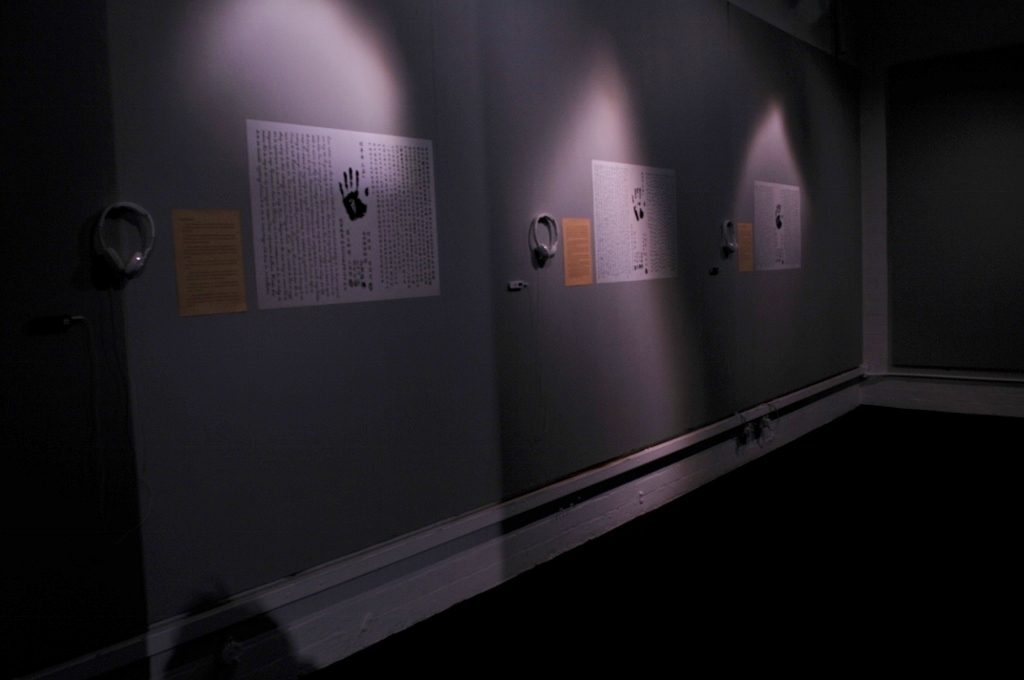 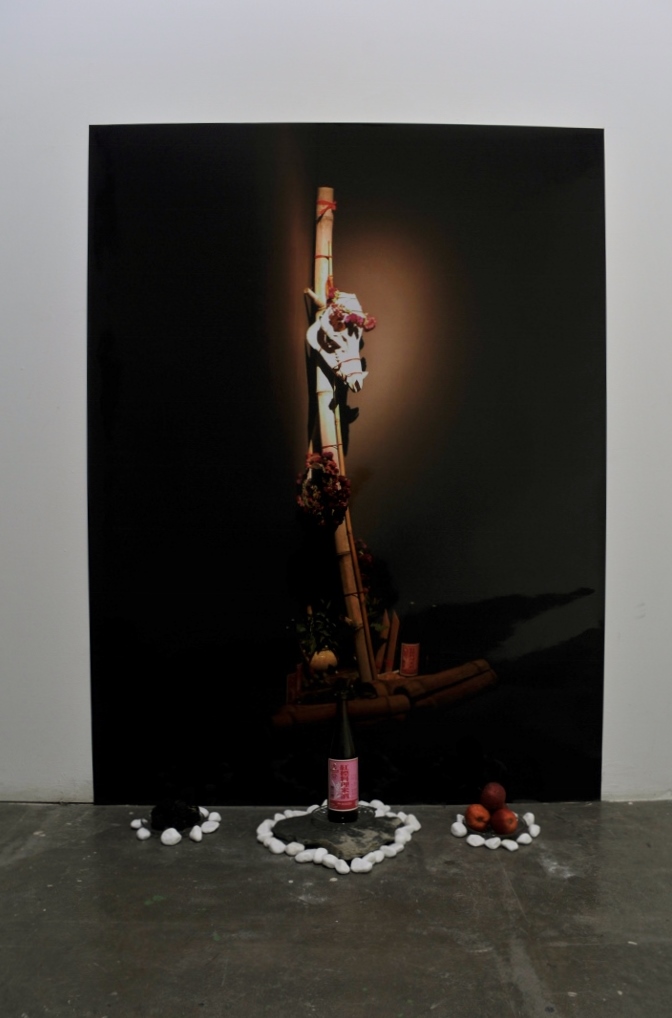 REPERCUSSION, is an exhibition of contemporary Taiwanese art, curated for the Golden Thread Gallery by Professor Chin-ming Lee, featuring the works by Chen, Chieh-Jen; Yang, Shun-Fa; Chen, Guan-Jhang; Ni Xiang And His Friends; Chen, Kuan-Ying. The exhibition brings together individual approaches to the subjects of religion, language, privatisation, the market, and collaboration and in doing so offers an insight into another culture and an opportunity to reflect upon our own.

When one is distant from his/her hometown, one is easier to make correct judgment about his/her own, or exotic, culture. Under the internationalization wave, observing oneself, from others perspective and through an intimate, but also aloof, way is necessary…  REPERCUSSION is our response of the exhibition Voice Travel: Conversation between two harbors which took place at Kaohsiung Museum of Fine Arts, Taiwan, this summer… Chin-ming Lee

The Route, by Chen, Chieh-Jen, first made for the 2006 Liverpool Biennale takes as its starting point the effect of the Thatcher government’s systemic privatisation of British ports and the parallel actions of the Taiwanese government. The work employs the historic Neptune Jade incident as a means of connecting and extending a response to the growth of neoliberalism promoted by national governments.

The Temple of Kaohsiung Series by Yang, Shun-fa documents the iconic roles that Temples play in Taiwanese culture. He brings to the fore how people have adapted where they live and work in order to maintain their spiritual lives in response to a time of wider cultural transition. Chen, Guan-Jhang’s work Local Narration – Says The Tribal Psychic locates language as the key to understanding history and culture. Working with a local Shaman Chen, Guan-Jhang’s attempts to instigate the revival of not only a reading but of the sounds of a lost language.

Chen,Kuan-Ying, proposes that to be an artist is simply to be a kind of vendor. “We pick up the waste, and using it as material we create artworks”… His Watermelon project typifies his approach to unpicking the rarified object by working within the confines of a traditional market, and locating his practice in a process of exchange with the public/the shopper.

As can be ascertain from the way Ni Xiang in which describes the authorship of his practice as being the work of Ni Xiang And His Friends his focus is very much on how meaning is created in collaboration. Often starting with cultural icons and contemporary interpretations he creates series of interconnected works with multiple configurations and meanings.

Chin-ming Lee, who spent a month in Belfast working as an artist as part of the Horse Head International Sculpture Project in 1999 has been instrumental in forging links and fostering cultural exchange between the two historic Harbours cities of Belfast and Kaohsiung since. This summer Chin-ming Lee co-curated the exhibition Voices Travel with Brian Kennedy at the Kaohsiung Museum of Fine Arts, the exhibition co-produced with the Golden Thread Gallery, featured works by a mix artists from the North of Ireland and Taiwan. The exhibition featured as part of the Museum’s 20 anniversary celebration program and attracted over 48,000 visitors. Voices Travel was the third exhibition featuring artists from the North or Ireland in the last five years co-produced by the Golden Thread Gallery in Taiwan.  Previous exhibition were A View from Napoleon’s Nose, at the Kao Yuan Arts Center, Kaohsuing was curated by Brian Kennedy in partnership with the Golden Thread Gallery, the second Instances of Agreement curated by Peter Richards was also at displayed at the Kao Yuan Arts Center, Kaohsuing and hosted by Professor Stone Lee.