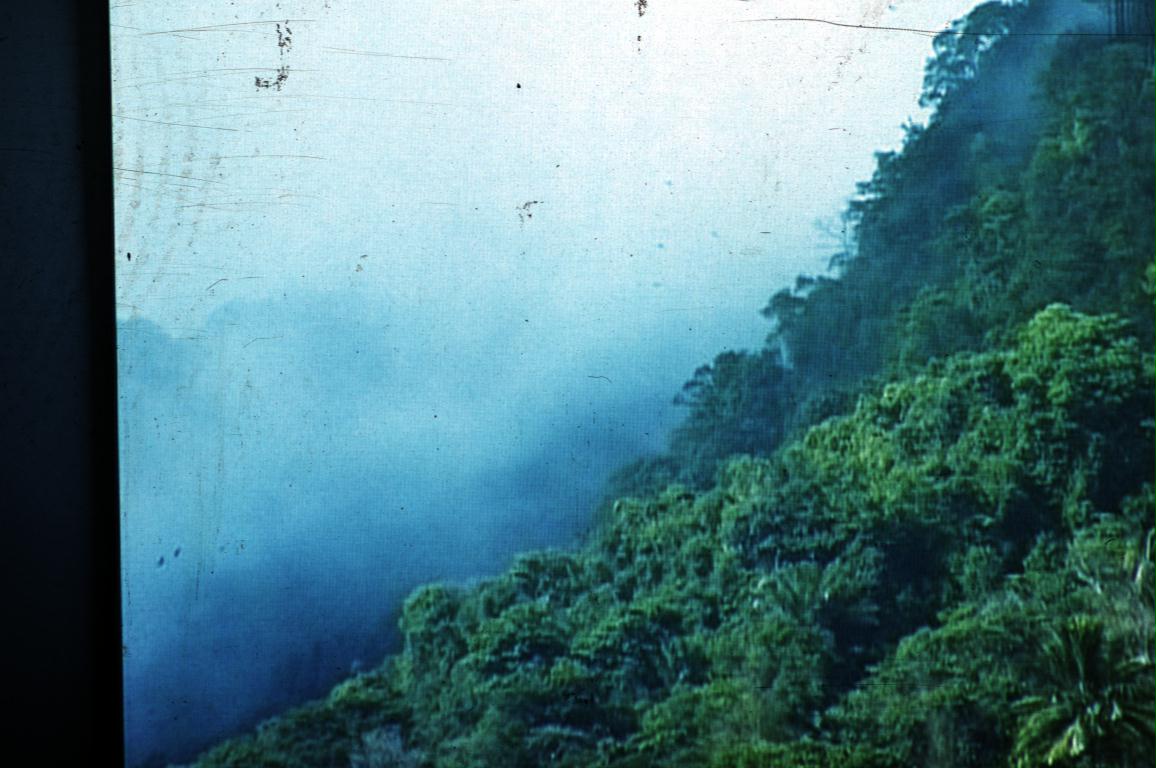 On the Eye
An exhibition of works by Susan MacWilliam 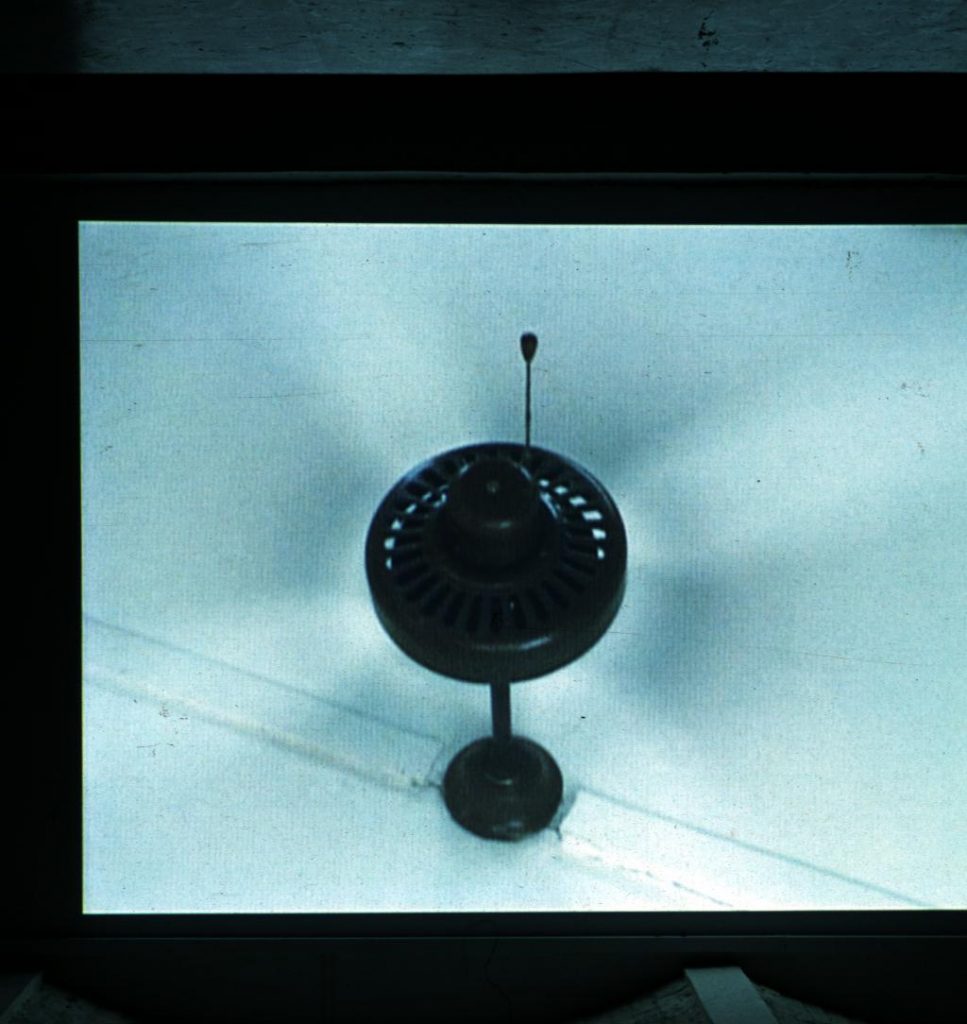 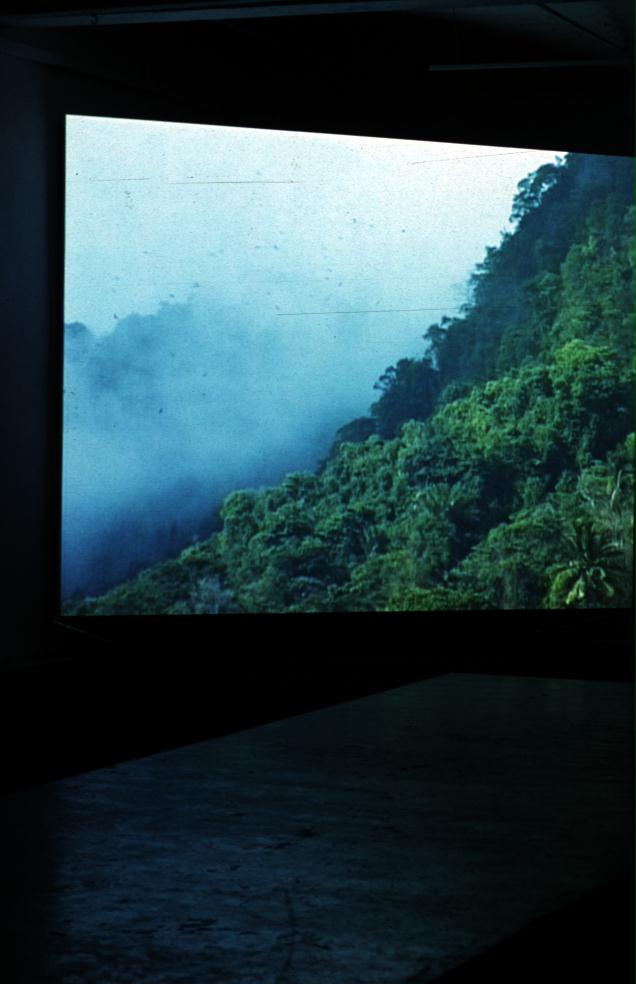 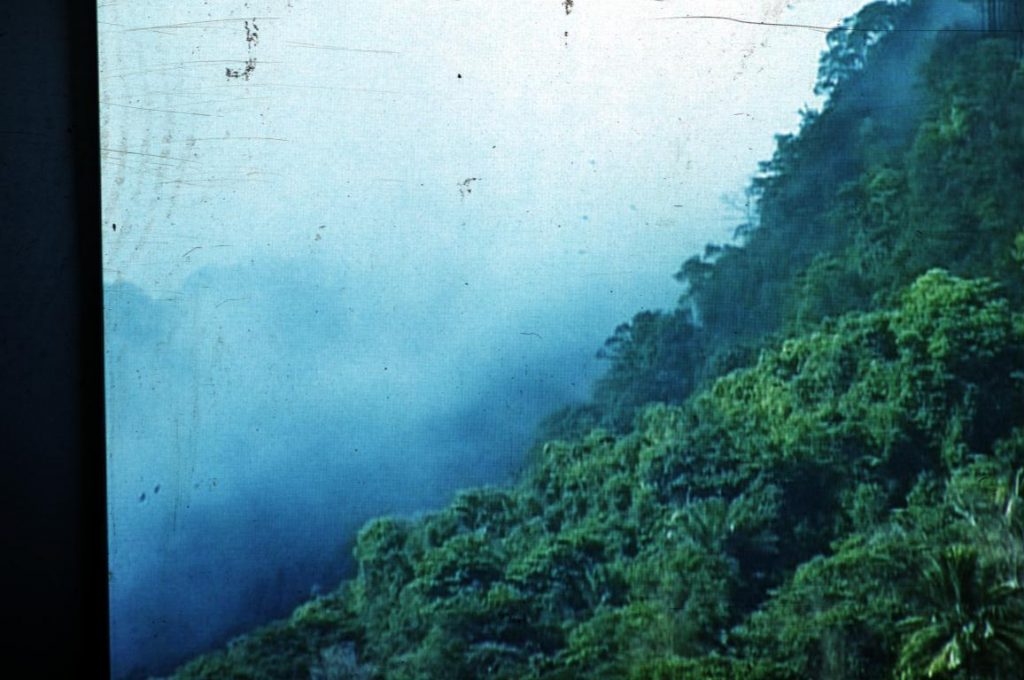 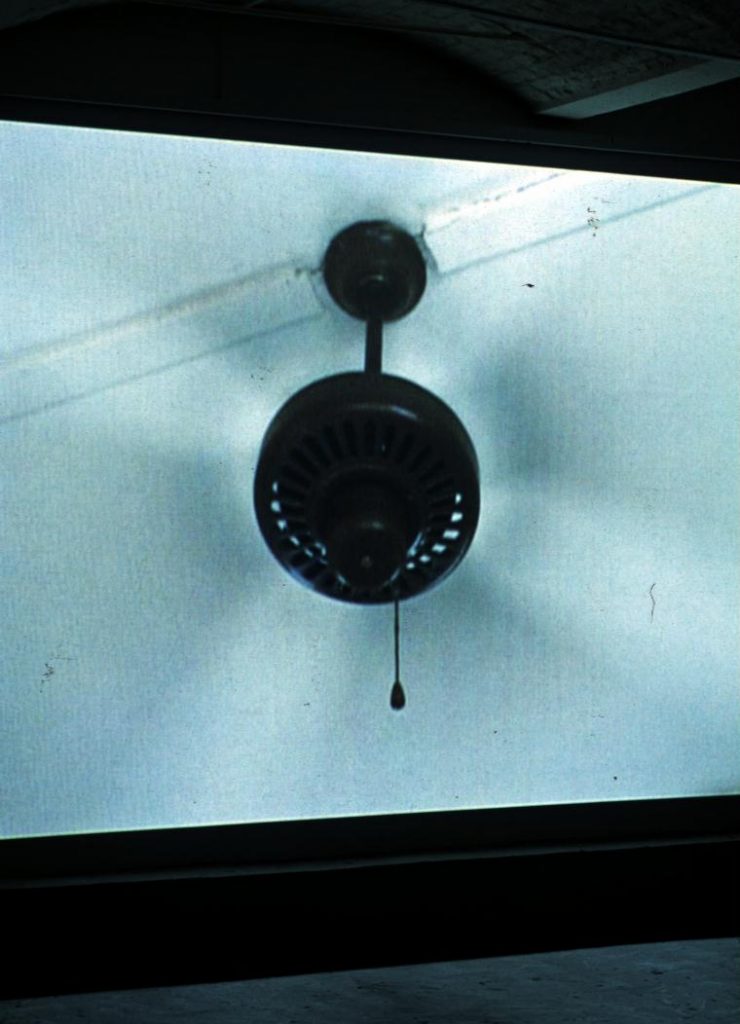 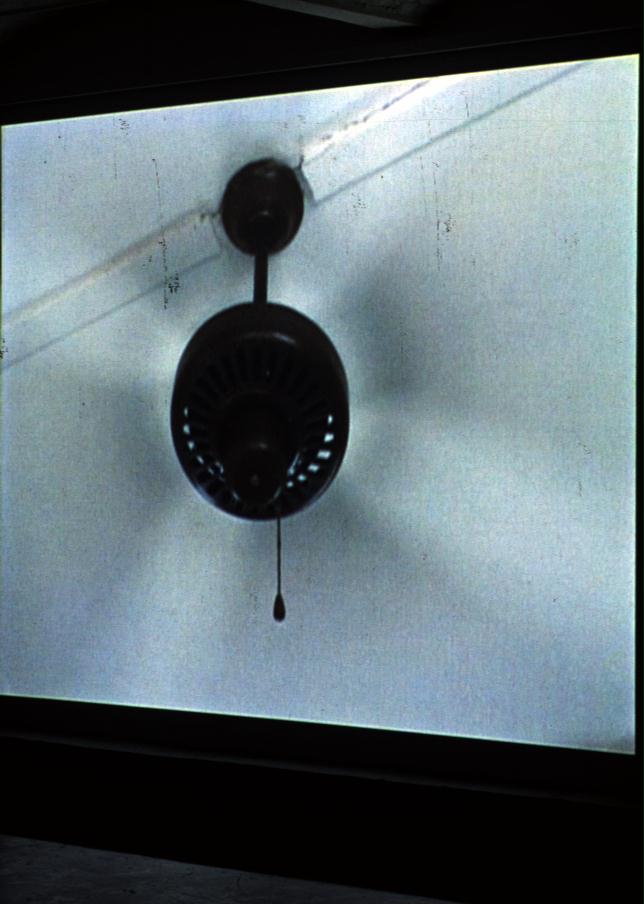 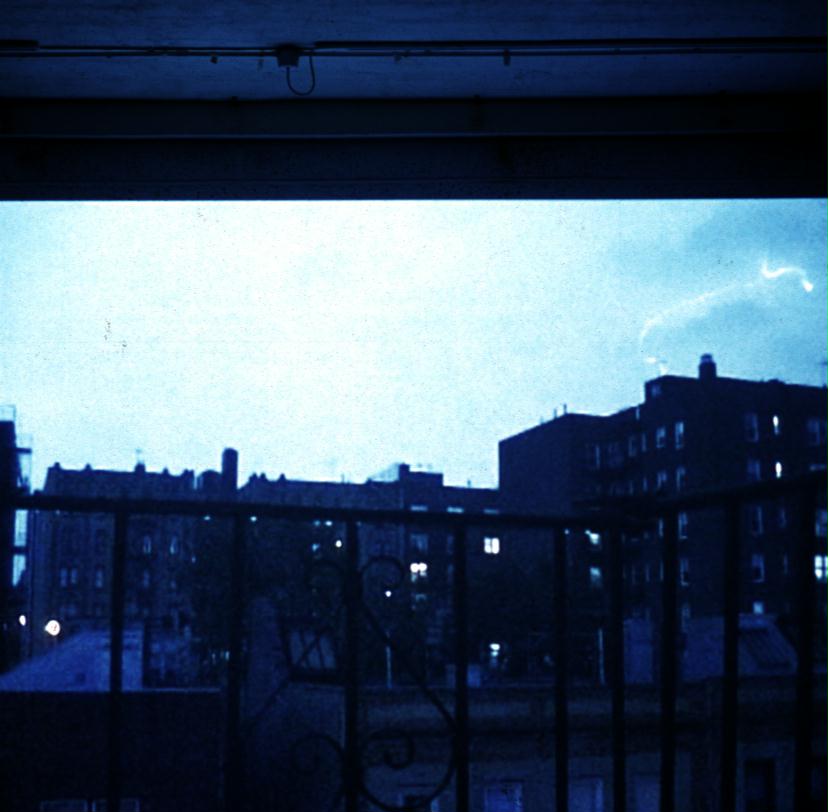 The projected video images by Susan MacWilliam in her exhibition On The Eye can’t help but catch the eye.

The vibrant images of a tropical forest with a haze of thick steam obscuring the landscape, the flicker of a strobe reveals itself on a rotating fan and lightening flashes over a city skyline. There is no denying the fact that this exhibition, where reflected light is an integral aspect of the work, is an intensely atmospheric experience.

MacWilliam built the work from video footage shot during art residencies in New York and Trinidad. “I want my work to be interesting to the eye, brain and challenge perception,” she said. “I’m interested in constructing arresting, engaging, visual images. I am satisfied when people are intrigued enough to want to continue watching my installation to see what happens and are slightly mesmerised by the outcome.” MacWilliam’s interest in photography, visual perception, after image and how people read depth and movement are all explored through her three works Mountain Mist, Fan and Lightning Storm.

Images are revealed and obscured over time, audio repetition is used to echo the edited footage and the tracks overlap to build up a dense aural image of interior and exterior spaces. Bringing out her creative energy, MacWilliam is grateful to the two residences she has had and expresses deep desire to do more.

“Spending time in another location you see things differently. It is also interesting to gather material at a time being unsure of how you will use and develop them at a later point,” she said. She attended New York on a Northern Ireland Arts Council sponsored residency in 1999/2000. “It was for a year and gave me a great opportunity to concentrate on my video work as well as see the current, contemporary and historical video art in the city and attend some massive galleries,” said MacWilliam. She also got the opportunity to have dialogue with other artists from around the world.

Her second residency in Trinidad was for six weeks 2001. This residency was the result of her exhibition in Limerick at the annual EV+A show in Kilkenny where her video and installation impressed the international curators.

“Trinidad was significantly different, both culturally and in terms of the landscape. I went during the rainy season, though it was still very hot. One of the video pieces shot depicts this, showing a view of the mountain with the mist rising.”

The footage for lightening storm  was shot in New York but involved a lot of editing afterwards, which is a feature of MacWilliam’s work.

“I duplicated lightening bolts into added frames so the actual lightening storm was magnified and repeated,” she said.

What MacWilliam was looking to achieve in this piece was for the viewer to question whether the lightening storm was real or an illusion.

‘The same applies with the mountain mist and fan. MacWilliam added layers, slowing down and speeding up the editing of the piece and adding light creating a very atmospheric and sometimes confused effect.

Each piece also has an accompanying audio soundtrack, which was also recorded while she was on residency.

“Loverlap the sounds and images and challenge viewers to think about how you look at things and how images are revealed over a period of time. It is about the ideas of illusion, perception and how we see,” she explains.

Mainly due to the heat in Trinidad and the mass of overhead fans in every building, MacWilliam was inspired to look closer at this subject matter. “Thave always had an interest in how the moving image was made and I investigated how motion and the
movement of blades distorts the images penetrated to us.”

In The Fan, MacWilliam creates a flickering/strobing effected when the blade of the fan cuts out the light.

“Ido work for a very long time on each piece and get very immersed in me work, but it is interesting to reach the point where you resolve a piece of work and seeing the end result,” said the proud artist.

MacWilliam had a traditional background in art, studying fine art at Manchester and working as a painter before moving to sculpture and then in moving image. Her move into this medium has opened up a whole new area of work and lead MacWilliam into a whole new course of “different and exciting research”.

“I have been intrigued by slightly odd myths, stories and spiritualities. Last year I constructed a piece based on the myth of the late 1800s that when a person died, if you opened their eyes you would see the last image they saw before they died,” explains MacWilliam.

At the moment she is researching a new body of work about a magician who worked in New York in the
1950s who was apparently able to see even though his head was bandaged. “I found a photo of this
magician and was inspired to research it future because it was odd and interesting,”