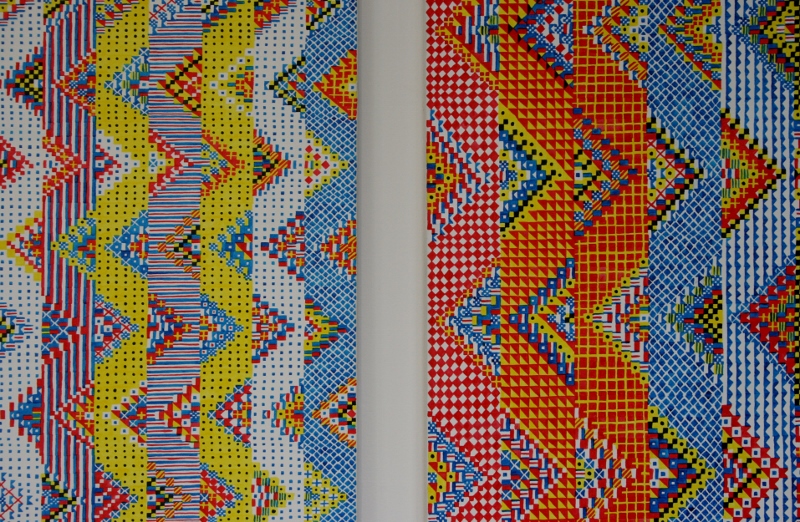 Ocular
A solo exhibition of works by Gary Shaw 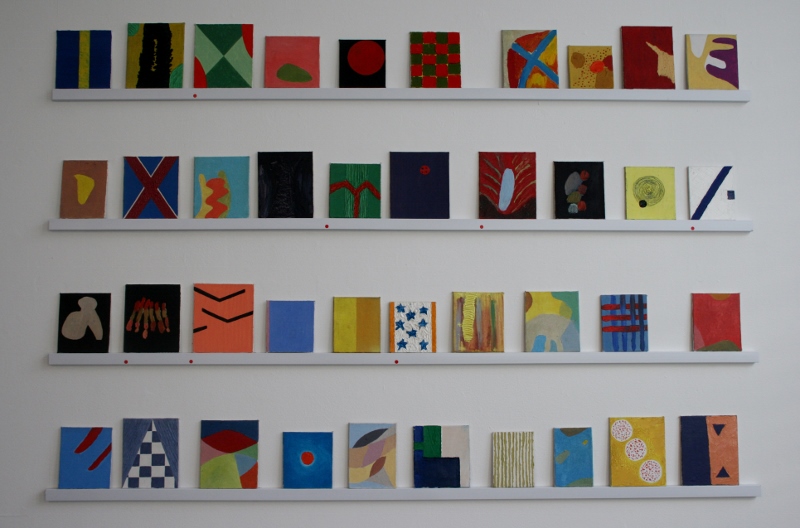 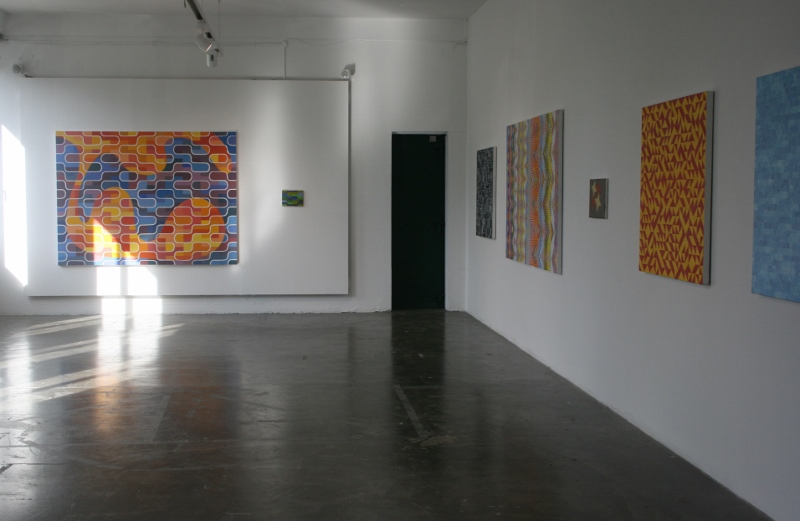 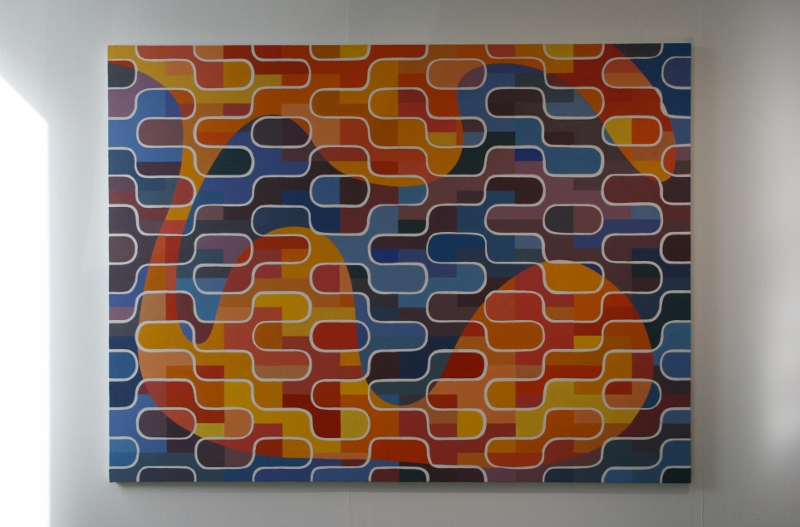 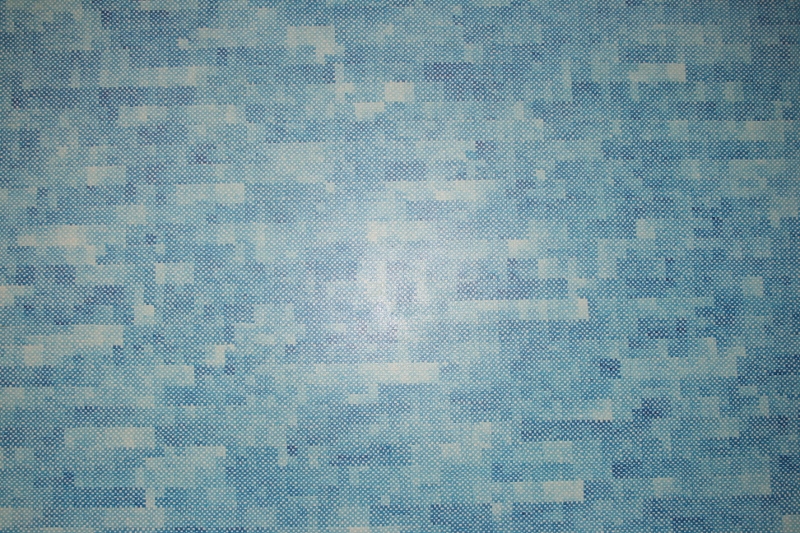 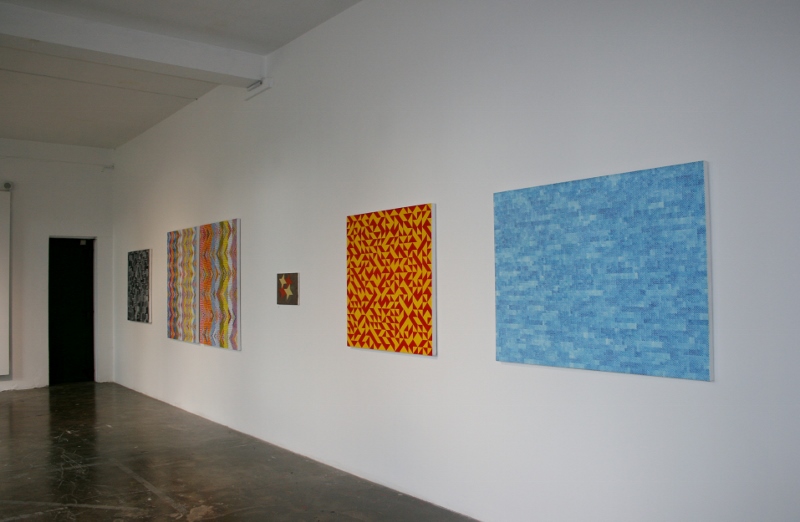 In Ocular, Gary Shaw demonstrates his abiding interest in colour, pattern and form.  In what can be regarded as a mini-retrospective, Shaw exhibits paintings of varying scale from several different stages of his career.  In keeping with the experimental ethos of Golden Thread’s Project Space, the artist has hung several small, early works together in order to create a new, larger piece.  This composite painting brings to mind a shimmering patchwork quilt and invites the viewer to contemplate these multiple miniature canvases in a new light.

Born in Harrogate in 1962, Shaw grew up in Adelaide, Southern Australia.  His early interest in Aboriginal painting is still evident in his work through his use of repetitive mark making and exploration of pattern.   Whilst studying for his MFA at the University of Ulster in 1997, Shaw began to make small paintings inspired by jockey racing silks, reveling in their colour and decorative design.

In 2002 Shaw began to draw on the system of maritime signaling flags as the starting point for his work, which increased in both size and intricacy.  These code flags, featuring colours and geometric shapes in particular arrangements, symbolize individual letters of the alphabet and can be used to spell out short phrases, enabling international communication at sea.  Shaw’s flag paintings therefore often function on two levels:  to the uninitiated they appear to be purely concerned with colour and form.  However, viewers familiar with maritime signaling will frequently discern text, (often lines of poetry or extracts from writings on art) seemingly concealed within these paintings.

Shaw’s recent works celebrate symmetry, colour and decorative ornamentation with patterns that often evoke Islamic tiling, woven fabrics or patchwork quilts.  By removing easily decipherable meanings, the works’ emphasis on repetition, detail and ornamentation has, in many ways, only increased.

Shaw is perhaps unusual, in that he works within the abstract tradition, which is largely colour based, yet he is partially colour-blind.  During the exhibition the artist will be facilitating a workshop, in collaboration with the Cedar Foundation, to explore how to make visual art more accessible to those with visual impairments.