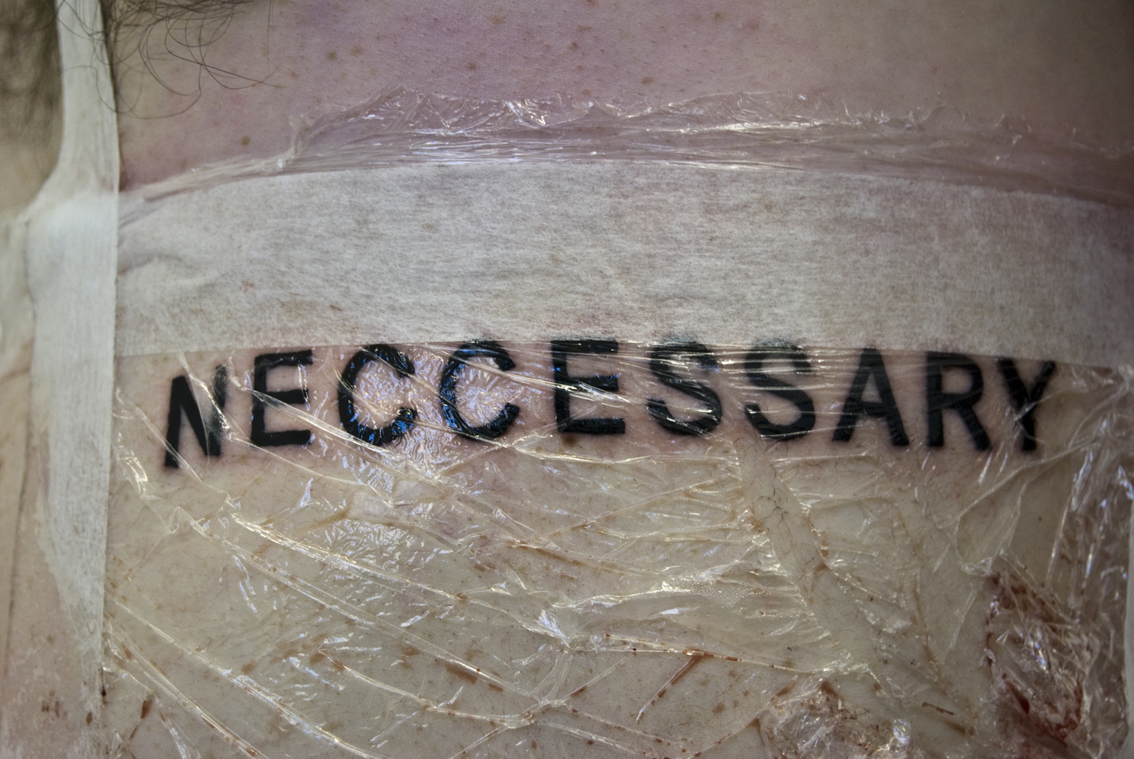 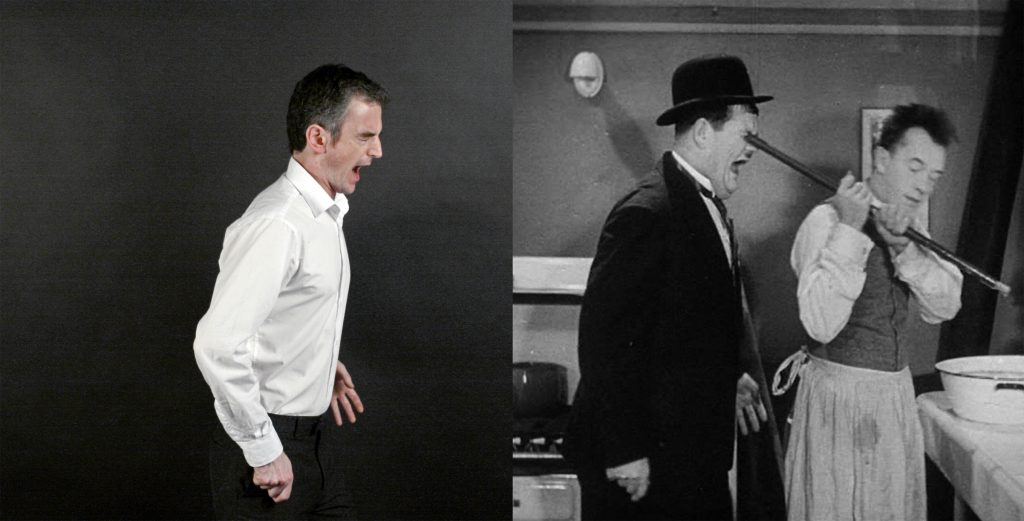 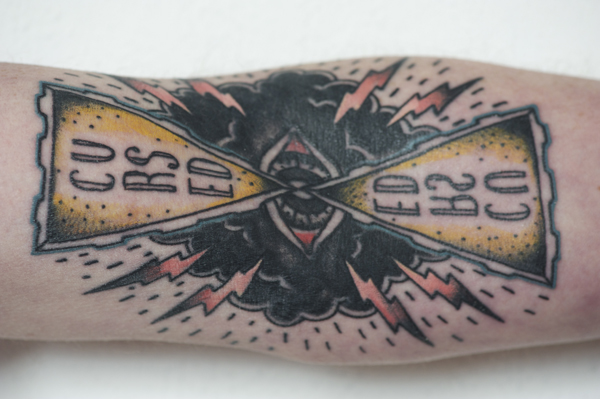 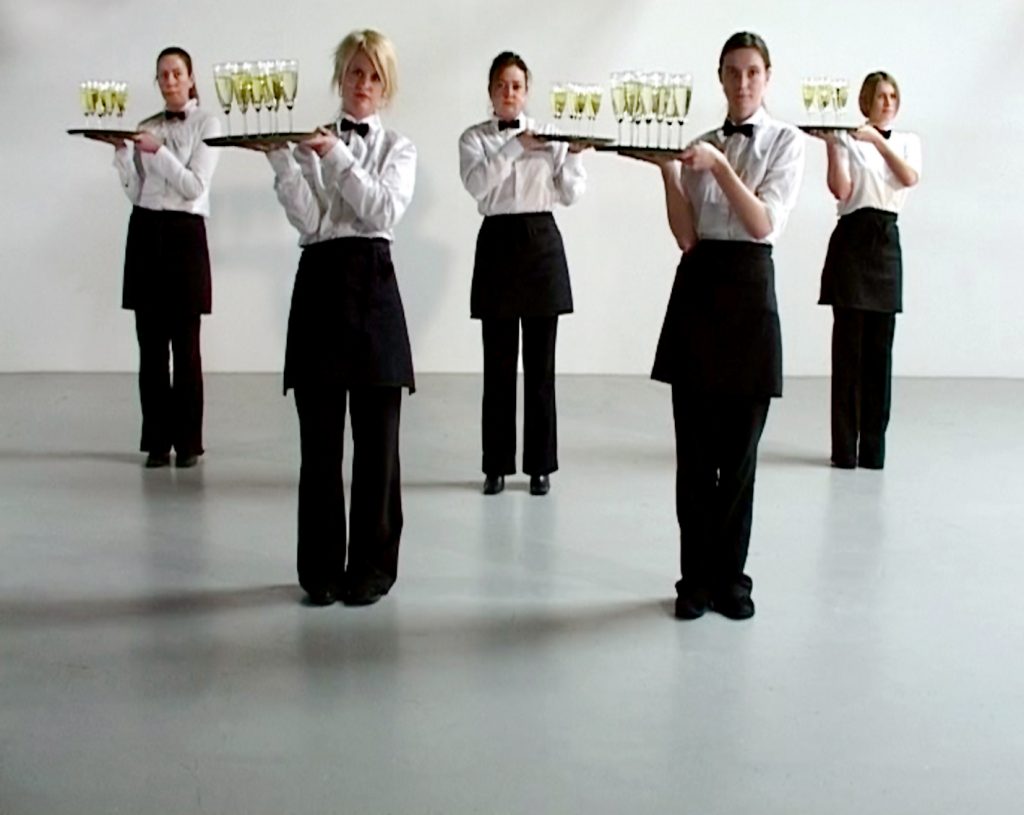 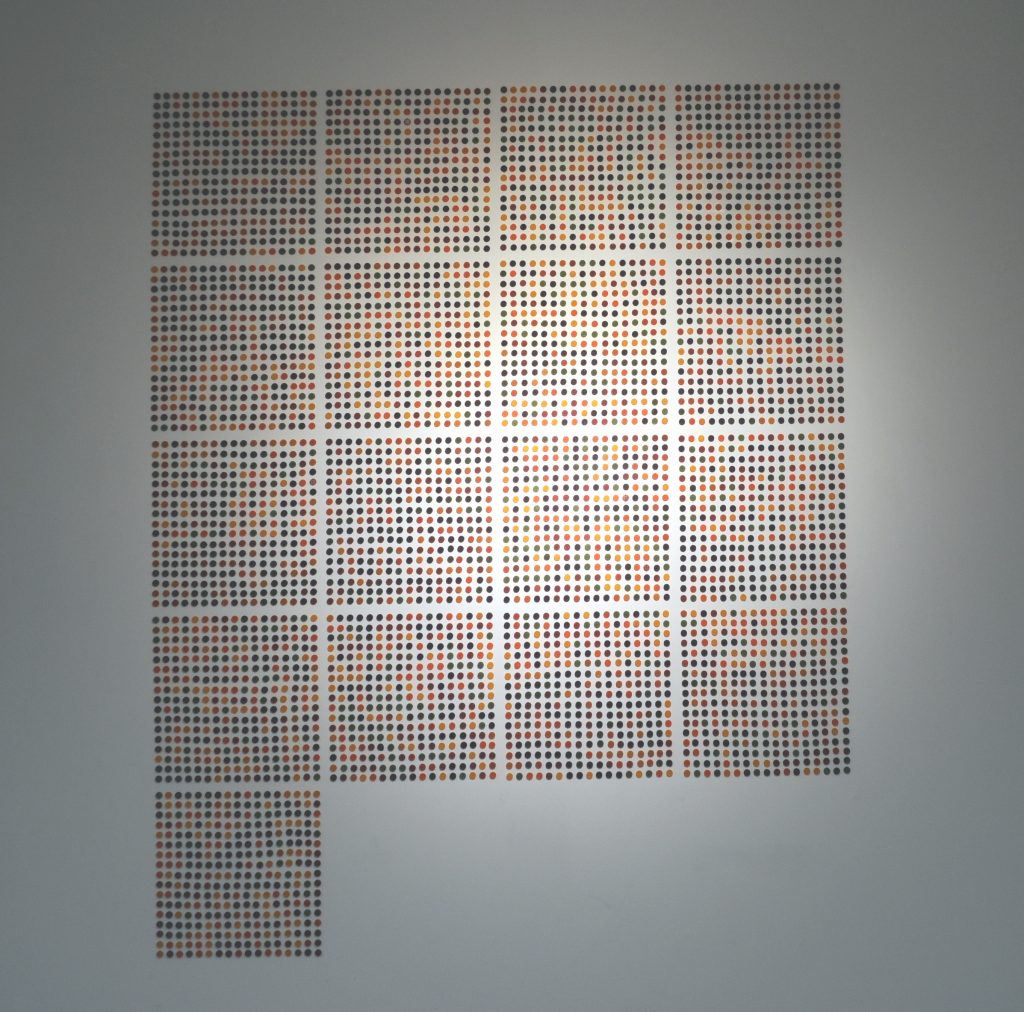 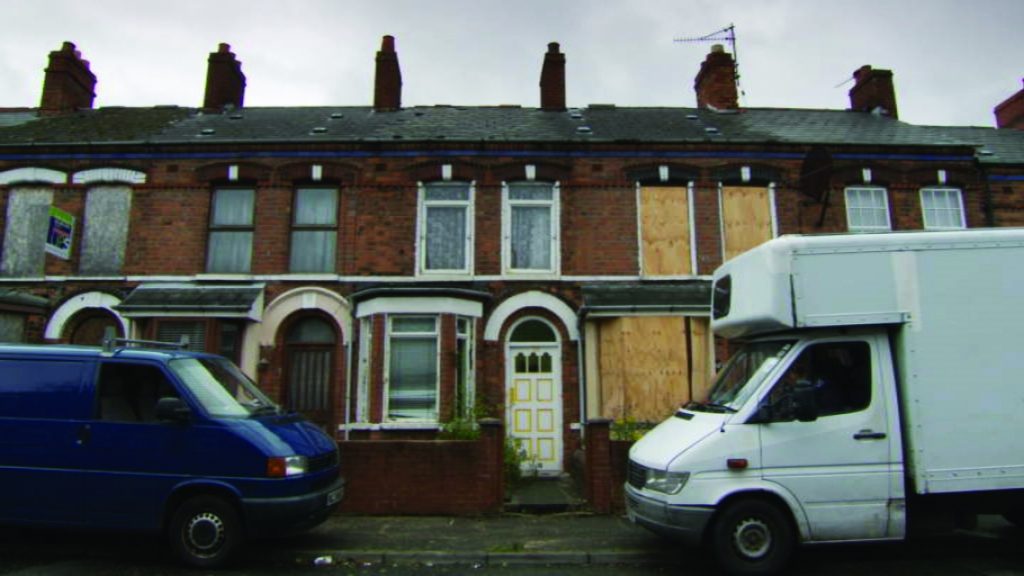 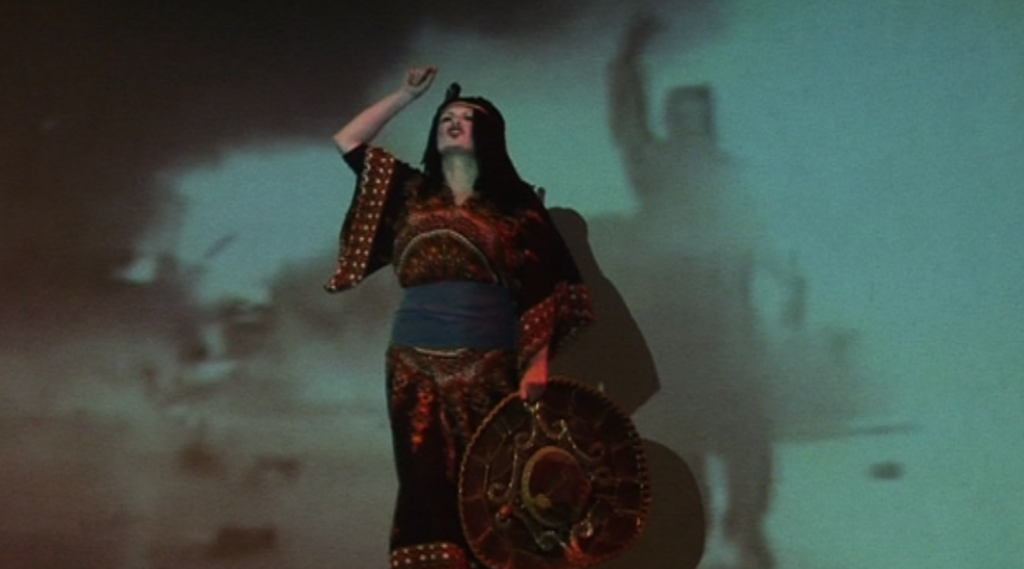 Instances of Agreement is an exhibition that brings together a range of artists and artworks from the North of Ireland in an attempt to explore the often complex and problematic nature of an agreement. The exhibition focuses on the formation and realisation of an agreement, as demonstrated between artist and artwork, artwork and viewer.

In March 2003, the Golden Thread Gallery, as part of its ongoing exploration of Belfast’s contemporary urban condition, presented The Agreement, a vast sculptural project by the artist Shane Cullen. Commissioned by Beaconsfield, The Agreement set out to commemorate the signing of the Agreement reached in the multi-party negotiations of 1998. Cullen’s work, 67 metres in length, presented the 11,500 words of the British-Irish Peace Treaty of 1998, carved into 55 panels. Through this work, Cullen set out to give the legalities within this charged document a concrete form, transforming the language of diplomacy into a visual artwork.

At that time, the Golden Thread Gallery was located in a former linen mill on the Crumlin Road. It sat within a set of social and political divides in North Belfast. The geographic location of the gallery provided a poignant context from which to engage with Cullen’s proposition. The gallery has since relocated to the edge of the city centre, to occupy a space somewhere between the city’s newly designated cultural quarter and the historic ‘sailor town’, its former industrial heart.  From here, the gallery has continued to engage with the ideas relating to the challenges, contradictions and complexities of living in a ‘post-conflict’ society.

In a recent article titled ‘What does peace mean in Northern Ireland, Professor John Brewer begins by stating “Peace is believed to be the outbreak of agreement, such that when people continue to disagree it is alleged there is no peace at all. This is quite wrong. Peace is about how continued disagreement is managed in the future”. This can equally be applied to the viewing of contemporary art: there can be no one “true” interpretation of an art work. The artist may have made the work assuming a distinct meaning for the work, but they have no means of persuading the view to agree with them. This acceptance of subjectivity is the unspoken agreement between artist and viewer.

In relation to representing an insight into contemporary art practices from Northern Ireland today, looking for instances of agreement within a range of artworks seemed suitably open and particularly relevant. The artworks I have chosen do not overtly address either the given social or political context.  Instead, they offer a series of negotiations and processes engaged with aspects of: communication; contract; labour; mediation; and ritual, relating to the complexities of the act of agreement.  In doing so, the select works come together to offer alternative ways of seeing and engaging with the contemporary climate.

Gary Shaw’s wall painting, titled ‘Abstract Painting’, attempts to make the unreadable readable. Shaw employs the standardised system of icons from the International Maritime Signal Flags to create abstract paintings that can literally be read. The work is engaged with processes of communication and of mediation, inviting the viewer to simultaneously undermine a preconceived idea of the nature of abstract painting, and to participate in the act of translation, a form of decoding of the experiential.

In stark contrast with Shaw, Brendan O’Neill takes as his starting point the everyday encounter with the explicitly readable messages carried by advertising, and focuses specifically on the posters produced by the Christian Church. O’Neill takes and transforms the scriptures, and through a process of abstraction and reduction, as can be seen in work Untitled Blur (Preparate para venire al encuentro de tu Dios…), he proposes another way of looking at the ideologies. Continuing the theme of everyday encounters, All that glistens is not gold and secrets never to be told, a sculptural installation by Deirdre McKenna, attempts to give a material form to local sayings and superstitions. Her choice of local expressions that are overheard, overused, and often out of context, are plucked from the everyday and then playfully interpreted, translated and re-presented by the artist in a physical form.

Martin Boyle, best known for producing playful and performative works, presents Sweet Wall Relief, consisting of nearly five thousand fruit wine gums (sweets) stuck to the wall of the gallery. Boyle re-presents a mass produced object, and in doing so looks to transform the accepted relationship with the material quality and function of the fruit wine gums. Likewise, Ursula Burke’s series of porcelain sculptures provocatively critique competing visions of ‘contemporary Irish experience’ in the creation of often ironic and conflicting representations. The conflicted representations are echoed in the choice of material, the material’s history, and its commonly perceived function as passive decorative objects. Peter Spiers’ work, Mimicking Frame by Frame, explores the state of Dasein, “a state of being through doing”. The artist mimicks the actions of the actor Oliver Hardy as he performs a series of slapstick gags, from film footage that has been deconstructed into individual frames.These are shown alongside the original footage and ask us to question what and how we see.

Ciaran O Dochartaigh, through his work Von Uexkull, attempts to set up communication centred on mimicry, repetition, and subtle variation, between a snail and a hybrid helmet. In bringing together the two seemingly unrelated forms, in what is described by the artist as a ‘probing metaphysical duel’, the work sets out to create a new language rooted in the artist’s ongoing exploration of National origins and Cultural displacement.

In her series of Lick Drawings, Jenny Keane, through the act of licking, sets out to transform the metaphorical in the literal.  The artist first renders a drawing of a recognisable film still, capturing a significantly horrific moment from a horror movie in pencil on paper. Keane, through the performative act of licking the paper, then removes the horrific element of the image, leaving behind the traces of saliva and blood on the image. The irony of the work consists in the original “horror” image having been replaced with the even more horrific and painful act of literally erasing the image with her tongue. There is also something horrific about Anne Quail’s CURE I US – Nettle Sting Cure video installation which shows the artist both stinging herself with nettles and then attempting to calm the sting with dock leaves, the traditional cure. The ritual of the cure is investigated, as is the act of self-infliction.

Sarah Greavu’s work Riot grrrl presents the question “Is the figure on the screen dancing or rioting?”.  Through the deliberate manipulation of the original footage, we are purposely presented with an ambiguous action. We are left to draw our own conclusions, directed in part by the title, and in part based on our own contextual understanding.

The exhibition includes two separate works featuring artists negotiating a tattoo. In the case of Michael Hanna’s Calculated Error, the work is presented as a photograph and text panel, documenting a mistake that was made on purpose. The artist set about securing public funding to correct his mistake before actually making it. The work makes explicit its intention in the form of a formal contract. The collaborative work by David Mahon and Helen McDonnell, two independent artists in their own right, was created for an exhibition, Cursed, that took place in July 2011 at Catalyst Arts Belfast. They designed, and then Helen (a tattoo artist) tattooed on David’s arm, an image that was used for the publicity of the exhibition. In addition to questions of commodity and ownership, the work acts as a permanent reminder of an ephemeral exhibition.

Sarah Greavu’s A Removal Job also celebrates the ephemeral, capturing the harsh beauty of destruction by showing a house being demolished. Contrasting with the shear power of destruction, is the easy camaraderie of the workers. The human capacity for voyeurism is also explored in Katherine Nolan’s darkly comic video work, You are a Very Naughty Boy. Dressed provocatively, it is hard to look away from her, yet Nolan continuously chastises us for watching. Her repeated rebuke, “You are a Very Naughty Boy!” escalates in tone and is punctuated by the light being stamped on and off, daring viewers to keep looking.

Waiting, a video installation by Maurice Doherty, dares viewers to look away. Five waitresses were employed to stand holding champagne glasses on a tray for as long as possible. Inevitably, one by one they drop their trays, but the wait for the expected crash is mesmerising, and the tension felt by the waitresses is magnified in the viewer, as their voyeurism implicates them in the conclusion. If the viewer chooses to stay watching, they have tacitly agreed to share the anxiety.

Visual artists rarely have the chance to engage directly with their audiences, but the artists in this exhibition have employed a variety of devices to persuade viewers to enter into an agreement with them purely by engaging with the works. There is an acceptance that subjectivity requires a plethora of interpretation, but a tacit agreement that by looking the viewer will at least form an opinion. Just as John Brewer suggested that peace is actually managing disagreement, it is accepting the breadth of opinion and responses to art that ensures its longevity.

The Arts Council of Northern Ireland is the principle supporters of the Golden Thread Gallery.

This project has been supported Troytell LTD