Another Something Other
An exhibition of work by Peter Richards 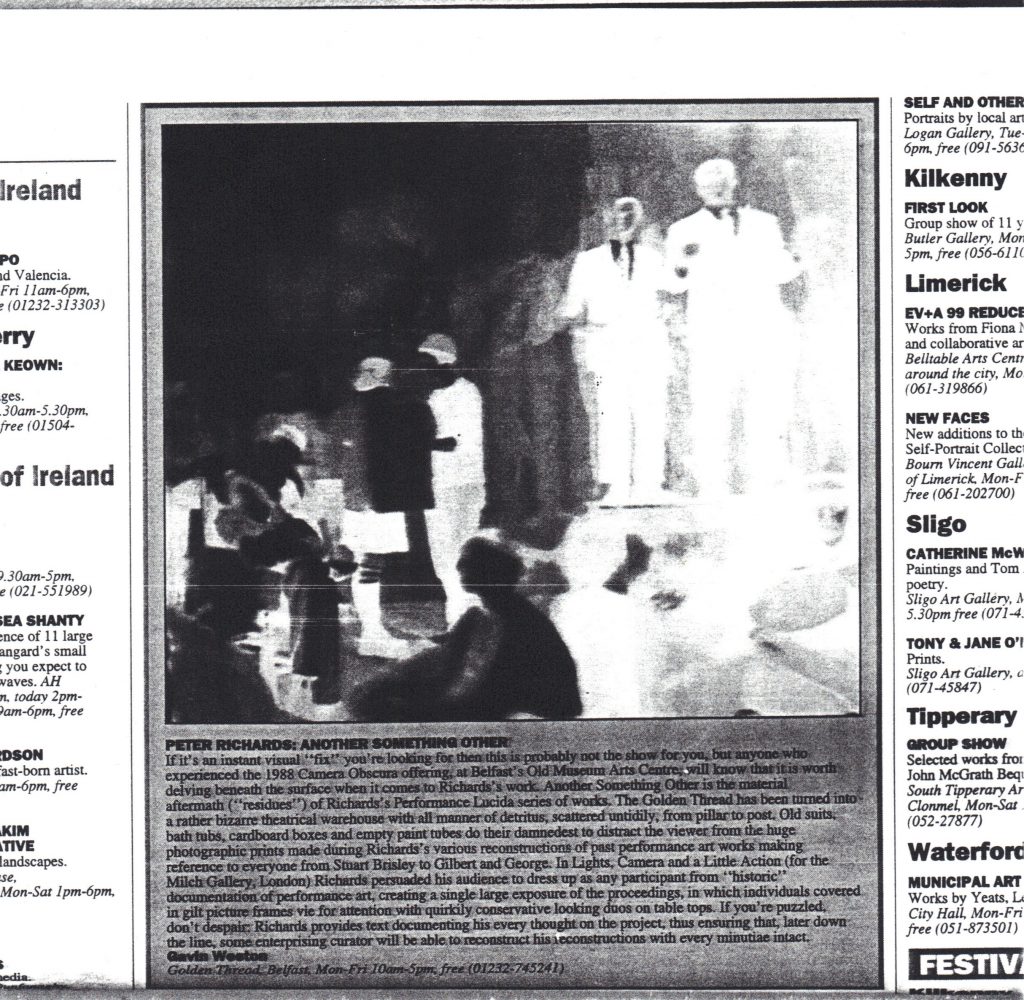 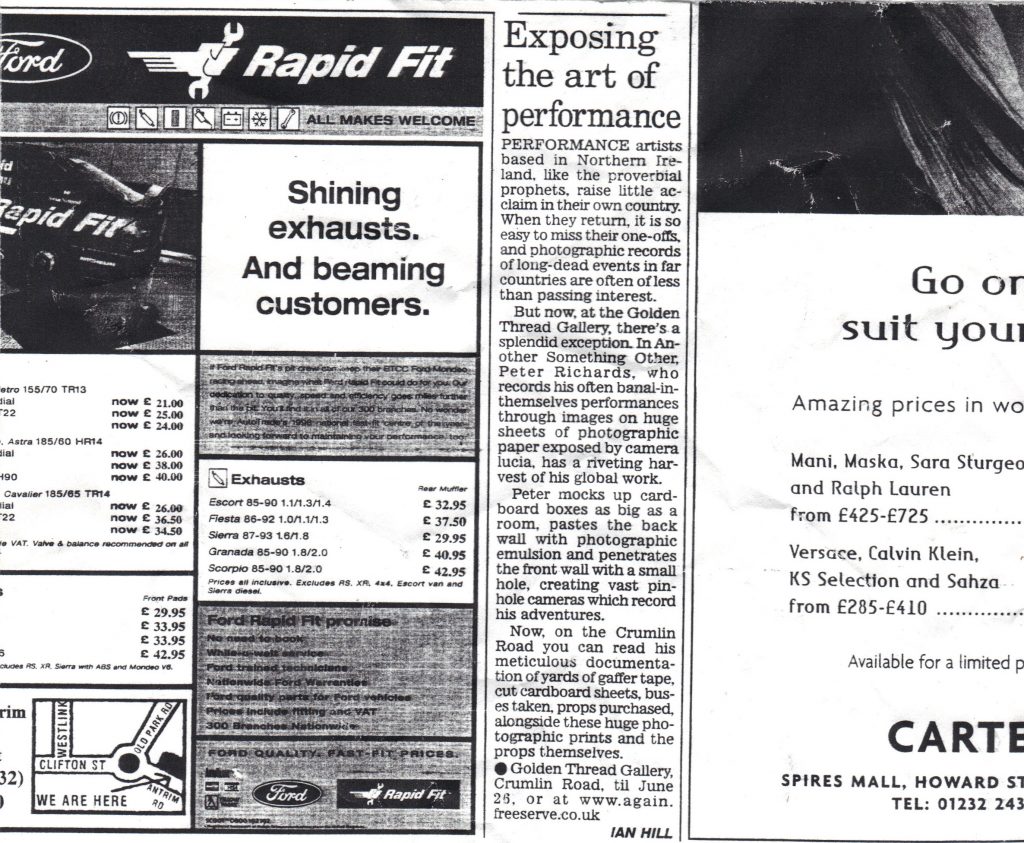 Another Something Other, Peter Richards’ exhibition at The Golden Thread Gallery, consists of the material residue of twenty ‘performance/documentation’ works – his Performance Lucida series – made between 1996 and 1998. This residue includes objects used in the live element, Richards’ textual documentation of each work and, crucially, the (processed) photographic paper upon which each performance was projected using the principle of the Camera Obscura (the pinhole camera).

Considered in terms of performance art the work is very interesting. Considering the photographs yielded by this process, especially when they are taken out of the context of the live event (as they are here), is a mixed experience. While some are satisfying others are not.

Through the Circumference, 1997, counts amongst those that are effective in their own right. This piece consists of a large (approx. 175 x 75 cm) black and white print, speckled with different intensities of black, accompanied by a navy and white striped apron, a blowtorch, and a used ashtray. Although the photograph is far from figurative, there is enough variation in tone for the print to be intriguing. Confronting it is reminiscent of confronting a Pollock painting in which the action by which it came about is also a significant part of its subject. The photograph of Pile Up/Down, 1997, is more decipherable and also works well. The whole consists in an almost hieroglyphic black and white print hung on one pillar with the toy cars, raincoat, cross and a schematic face drawn in white on black cloth that feature in the photograph on an opposing pillar. The diametric positioning of these two parts of the material residue (photograph and props) generates a certain tension: what is the ‘real’ thing? Which tells more? Which has more value? Indeed, these are the questions that Richards’ practice raises in relation to photographs and the performance they represent.

Many of the ‘material residues’, however, are not effective in their own right. In the context of the live event their indexical value – their conveyance of a sense that an event did take place – is enough to give the pinhole photographs interest and meaning, no matter how vague the image. Outside of that context, while the photographs retain interest as a record, only photographs that are effective in their own right will hold the viewer’s attention and succeed in having ‘the art’ in both the performance and the documentation.

It may be that the change in Richards’ practice during 1998 was prompted by this difficulty. The most satisfying or effective works of Another Something Other are simply staged pinhole photographs. Of these, the most potent is Lights, Camera and a Little Action, 1998. This deep red photograph uses seven rolls of photographic paper and is around two metres high. Its ‘tableau’ is dramatic both in terms of its characters and their distribution. ‘Gilbert & George’ feature to the right of the photograph, there is a seated Christ-like figure just left of centre, and the other characters may well be recognisable to those familiar with the history of performance art. The arrangement of these curious characters is reminiscent of paintings in which philosophers are dotted about courtyards in small groups. Alternatively and despite obvious differences, the way in which the characters are arranged around a central Christ-figure causes Leonardo’s Last Supper to spring to mind. All of this makes it a very interesting photograph but it does not address the relationship between the documentation of performance and performance as his earlier works did.

Another Something Other re-presents the material residues of a very interesting series of ‘performance/documents’, some of which work well in this context. That a significant number do not have more to offer than their indexical relation to an original performance suggests that a more selective presentation might have represented Richards’ work better.