GTG Blog: Show Us Our Culture 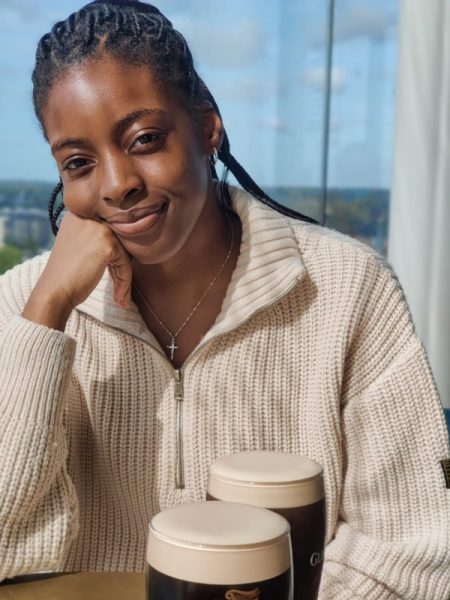 Our Community Foundation NI New Needs intern Esther Andare reflects on the discussion that she led in our first GTG Improving Diversity & Inclusion in the Arts online session, which invited individuals to share their experiences as audience members.

On the 24th of October, I kicked off the Golden Thread Gallery Improving Diversity webinar series with an informal discussion with individuals, who were Black, mixed-ethnicity and Asian, and from across the UK and Ireland, about their view of the current state of diversity and inclusion within the arts sector. It was amazing to have a conversation, as diversity should be given within society – not an afterthought.  I believe the arts should be at the forefront of diversity and inclusion. Yet, the question has to be asked – is the art sector actually doing anything to address the visible lack of representation and slow rate of change within the sector as a whole?

I opened up the discussion with an eye-opening fact from Jemma Desai’s ongoing study This Work isn’t For Us. Desai found that institutions have been repeating the same rhetoric about the need to reform to foster more diversity and inclusivity since the 70s:

“Diversity narratives in public documents often focus on the lacks, gaps and description of the marginalisation of the excluded rather than the behaviours and attitudes of those that are the beneficiaries of that exclusion – often those that do the excluding.”

This only emphasises the idea that a systemic change is needed to end the cycle of only talking about being inclusive instead of making substantial change.

Within this discussion, I wanted to highlight the importance of language and terminology that organisations used to increase diversity and inclusion and how, in my opinion, has restricted inclusion. Therefore, a large majority of the discussion was centred around the term BAME.

The origins of BAME began in the 1960s and 1970s, black people would be referred to as the black community. It became apparent that the Asian community wasn’t represented, so it became the black and Asian community. However, it was brought up that the Black and Asian community wasn’t inclusive, and there were other minority ethnic groups not represented, so it changed to BME. However, as non-black minority ethnics were not defined, and the term finally became BAME. Over time BAME has become more of a buzzword within organisations and the government sector as a shorthand and used when companies and organisations want to target diversity.

The participants and I spoke about the fact that the use of BAME “is damaging”, mainly as it forces those that are not white into a metaphorical box, the term “kind of segregates you…”, in addition to placing whiteness as a default within society. By skirting around the issue – my ethnicity – with the term BAME, the word feels like an attempt to segregate from the white default and make those placed in the category feel like an ‘other’. I am black and very much aware of that fact. I am not a ‘BAME’ woman, I think the acronym is a modern way to call someone coloured. BAME can only be regarded as a dirty word to me, highlighting the fact that I am not a part of the mainstream; however, not significant enough to warrant my own racial category.

However, moving forward if the term BAME is rejected, what should be used instead? Might a new name just have the same connotations, because “would it just be replacing BAME with another word?” Any label would bring about more negative connotation – as one participant noted, “words such as ‘BAME’ or ‘people of colour’ are titles that were chosen for us by other people”. Which made me think about a quote from the book Half a Yellow Sun by Nigerian author Chimamanda Ngozi Adichie:

“I am Nigerian because a white man created Nigeria and gave me that identity. I am black because the white man constructed black to be as different as possible from his white. But I was Igbo before the white man came.”

One of the critical flaws with the term BAME is the term’s ability to diminish the fact that we all face different and unique issues.  I cannot comprehend how the experiences of being Asian (which in itself is a diverse grouping within itself) can be lumped into the experiences of being Black. So, by using the term BAME to refer to a target group as a whole to increase inclusivity, organisations fail to look at the nuances that each individual ethnic group have, and ways to cater to what they want.  When BAME is used to describe a person, they are basically stripped of their identity and their experiences as an individual.

What was apparent was the fact that we would simply like to see ourselves and individual cultures represented in the arts. This luxury has been afforded white artists as the status quo.  The increasing the number of ethnic minorities participating within the arts would go hand in hand with the increase of artists from an ethnic minority background. An example we talked about was a children’s book Handa’s Surprise by Eileen Browne; the illustrations in the book depicted a culture that resembles their own, it showed Africa, the culture and the landscape.

To put it simply, if people from a black, Asian and ethnic minority background saw more of their culture represented within the arts, they would be more inclined to engage with and participate in it. It is easy to say, in a place like Northern Ireland that lacks diversity, that there is less urgency to expand and diversify the programme to showcase artists of different backgrounds. However, the ethnic landscape has changed dramatically in Northern Ireland and the works of art and institutions that present them should reflect this change.

It is a well-known fact that the Arts sector is predominantly white and too hard to break into; active steps need to be taken to make the industry more diverse and welcoming. There should also be more of an attempt to seek out and find ethnic minorities and show their work, connecting with the artists over platforms such as social media.

Organisations in NI and ROI that are doing amazing things!

Basic Space’s exhibition On Belonging explores the deconstruction of Irish culture linked with the rise of migration to the island.